WHY ARE WE FEEDING & FUNDING ISIS? 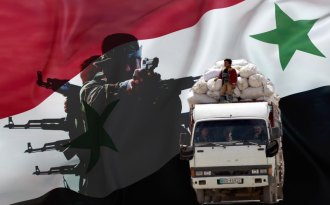 Out of the continuing Socialist chaos of the Obama run State Department comes another whistle-blower … reported by Jamie Dettmer of The Daily Beast,  exposing what was most likely intended to remain … out of sight.

GAZIANTEP, Turkey—While U.S. warplanes strike at the militants of the so-called Islamic State in both Syria and Iraq, truckloads of U.S. and Western aid has been flowing into territory controlled by the jihadists, assisting them to build their terror-inspiring “caliphate.”

The aid—mainly food and medical equipment—is meant for Syrians displaced from their hometowns, and for hungry civilians. It is funded by the U.S. Agency for International Development, European donors, and the United Nations. Whether it continues is now the subject of anguished debate among officials in Washington and European. The fear is that stopping aid would hurt innocent civilians and would be used for propaganda purposes by the militants, who would likely blame the West for added hardship.

The Bible says if your enemy is hungry, feed him, and if he is thirsty, give him something to drink—doing so will “heap burning coals” of shame on his head.

But there is no evidence that the militants of the Islamic State, widely known as ISIS or ISIL, feel any sense of disgrace or indignity (and certainly not gratitude) receiving charity from their foes.

The convoys of “humanitarian aid” have to be approved by ISIS and you have to pay them: The bribes are disguised and itemized as transportation costs,” says an aid coordinator who spoke to The Daily Beast on the condition he not be identified in this article.

U.S. Agency for International Development (created by JFK, is within the State Department)  The current USAID Administrator is Rajiv Shah, appointed by President Barack Obama.

Watching closely, working to understand all I may, in this "Age of Information", even from my limited view, I can see much of what's going on ..... and I oft see it's going to impact all of us which is why I share it. My focus is to expose evil, and to serve my Lord and savior Jesus in whatever way He shows me. If one waits long enough, better writers will come along and comment; it's just that I have so little patience with the evil that lurks among us and I've wasted so much time and now, there is so little left! WELCOME!
View all posts by josiahe →
This entry was posted in a href="http://www.startranking.com">search engine submission, Politics and tagged Daily Beast, JFK, Obama, Politics, Shah, Socialist, Turkey, USAID. Bookmark the permalink.