Are riots to spread into Western Africa’s Equitorial New guinea?

The population’s religion is Islam.   So why would …..

The annual average income of the populace in Equatorial Guinea is $296.  Couldn’t be because the dictator’s son has cancelled his order for building his Super Yacht, right?  Maybe because he’d planned on ordering it when his father retired and installed him as the new dictator?

This time, it wasn’t Wikileaks, (at least it’s not been said it is) but the news about the yacht has been leaked. 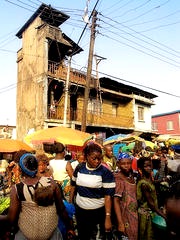 Imagine the potential resentment of the people when comparing this yacht to the lifestyle of the populace, with their average annual income of under $300, the increasing 6% inflation and the riots to the north ….

The Super Yacht,  was to cost $380 million …… nearly three times what the country spends on health and education each year.   The order has not been confirmed, and the son has now dismissed the idea of buying it ….. for now …. he’s not dictator, yet.

The yacht, was to be built by Kusch Yachts, a German company, and was to have a cinema, restaurant, bar, and swimming pool ……

Watching closely, working to understand all I may, in this "Age of Information", even from my limited view, I can see much of what's going on ..... and I oft see it's going to impact all of us which is why I share it. My focus is to expose evil, and to serve my Lord and savior Jesus in whatever way He shows me. If one waits long enough, better writers will come along and comment; it's just that I have so little patience with the evil that lurks among us and I've wasted so much time and now, there is so little left! WELCOME!
View all posts by josiahe →
This entry was posted in a href="http://www.startranking.com">search engine submission, Politics and tagged Dictator, Islam, SOCIALISM. Bookmark the permalink.