A Hamas manual on “Urban Warfare” found by the Israeli Defense Forces makes it unmistakably clear that Hamas INTENTIONALLY causes civilian casualties amongst its own people.   This manual encourages its fighters to engage in battles in civilian populated areas in order to draw an Israeli response. 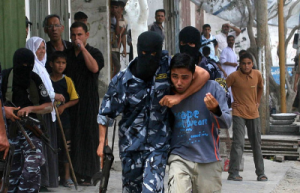 Thjs is ‘Exhibit A’ which indicts Hamas for war crimes and crimes against humanity by placing the people of Gaza as human shields,” said Rabbis Marvin Hier and Abraham Cooper, dean and founder and associate dean of the Simon Wiesenthal Center.

Israeli Defense Forces (IDF) in the Gaza Strip found a Hamas manual on “Urban Warfare,” which belonged to the Shuja’iya Brigade of Hamas’ military wing, the Al-Qassam Brigades.

The manual explains how the civilian population can be used against IDF forces and reveals that Hamas knows the IDF is committed to minimizing harm to civilians.

Throughout Operation Protective Edge, Hamas has continuously used the civilian population of Gaza as human shields. The discovery of a Hamas “urban warfare” manual by IDF forces reveals that Hamas’ callous use of the Gazan population was intentional and preplanned.

This Hamas urban warfare manual exposes two truths: (1) The terror group knows full well that the IDF will do what it can to limit civilian casualties. (2) The terror group exploits these efforts by using civilians as human shields against advancing IDF forces.

In a portion entitled “Limiting the Use of Weapons,” the manual explains that:

The soldiers and commanders (of the IDF) must limit their use of weapons and tactics that lead to the harm and unnecessary loss of people and [destruction of] civilian facilities. It is difficult for them to get the most use out of their firearms, especially of supporting fire [e.g. artillery].

Clearly Hamas knows the IDF will limit its use of weapons in order to avoid harming civilians, including refraining from using larger firepower to support for infantry.

The manual goes on to explain that the “presence of civilians are pockets of resistance” that cause three major problems for advancing troops:

(2) Problems in controlling the civilian population during operations and afterward

(3) Assurance of supplying medical care to civilians who need it

Lastly, the manual discusses the benefits for Hamas when civilian homes are destroyed:

The destruction of civilian homes: This increases the hatred of the citizens towards the attackers [the IDF] and increases their gathering [support] around the city defenders (resistance forces[i.e. Hamas]).

It is clear that Hamas actually desires the destruction of homes and civilian infrastructure, knowing it will increase hatred for the IDF and support their fighters.

Why Shuja’iya is Important

It is also of no small importance that this manual belongs to the Shuja’iya Brigade. The IDF fought a major battle in the neighborhood of Shuja’iya, which had been turned into a terrorist stronghold. The discovery of this manual suggests that the destruction in Shuja’iya was always part of Hamas’ plan.

Watching closely, working to understand all I may, in this "Age of Information", even from my limited view, I can see much of what's going on ..... and I oft see it's going to impact all of us which is why I share it. My focus is to expose evil, and to serve my Lord and savior Jesus in whatever way He shows me. If one waits long enough, better writers will come along and comment; it's just that I have so little patience with the evil that lurks among us and I've wasted so much time and now, there is so little left! WELCOME!
View all posts by josiahe →
This entry was posted in a href="http://www.startranking.com">search engine submission, Hamas, Terrorism. Bookmark the permalink.