OBAMA And His CONTRACT With “PRINCIPALITIES AND POWERS”

This below, is Re-blogged from: JewishWorldReview.com

It was titled: “The American President Knows What’s At Stake And He’s Chosen Sides” — by Caroline Glick. 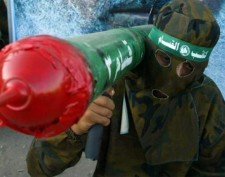 Operation Protective Edge is now two weeks old. Since the ground offensive began Thursday night, we have begun to get a better picture of just how dangerous Hamas has become in the nine years since Israel withdrew from the Gaza Strip. And what we have learned is that the time has come to take care of this problem. It cannot be allowed to fester or grow anymore.

We have known for years that tunnels were a central component of Hamas’s logistical infrastructure.

What began as the primary means of smuggling weapons, trainers and other war material from Hamas’s sponsors abroad developed rapidly into a strategic tool of offensive warfare against Israel.

As we have seen from the heavily armed Hamas commando squads that have infiltrated into Israel from tunnels since the start of the current round of warfare, the first goal of these offensive tunnels is to deploy terrorists into Israel to massacre Israelis.

But the tunnels facilitate other terror missions as well.

If the bombs had gone off, the buildings above would have been destroyed, taking the children down with them.

Other exposed shafts showed Hamas’s continued intense interest in hostage taking. In 2006 the terrorists who kidnapped Cpl. Gilad Schalit entered Israel and returned to Gaza through such a tunnel.

Today the presence of sedatives and multiple sets of handcuffs for neutralizing hostages found in tunnel after tunnel indicate that Hamas intends to abduct several Israelis at once and spirit them back to Gaza.

In an interview with Channel 2 Monday evening, Minister Naftali Bennett spoke of a mother at Kibbutz Netiv Ha’asara who told him that her children wake her in the middle of the night and tell her that they hear digging beneath their beds.

As Bennett said, this state of affairs simply cannot continue. People cannot live in fear that there are terrorists burrowing beneath their homes, digging tunnels to murder or kidnap them.

These tunnels must be found and destroyed not merely because they constitute a physical danger to thousands of Israelis. They must be located and destroyed, and Hamas’s capacity to rebuild them must be eliminated because the very idea that they exist makes a normal life impossible for those immediately threatened.

Hamas’s tunnels are also the key component of their command and control infrastructure inside Gaza.

Hamas’s political and military commanders are hiding in them. The reinforced bunkers and tunnel complexes enable Hamas’s senior leadership to move with relative freedom and continue planning and ordering attacks.

The sophistication of the tunnels and the malign intentions of Hamas are not in the least surprising.

But Hamas’s rapid advances in both tunnel and missile technology are deeply worrisome. At a minimum, they indicate that if it is allowed to end the current round of fighting as a coherent, relatively well-armed terrorist army, Hamas will be able to rapidly rebuild and expand its capabilities.

As a member of the Muslim Brotherhood, Hamas is not a stand-alone terror group. It is part of a much larger web of Islamic jihadist terror groups including al-Qaida and its affiliates as well as the Shi’ite Hezbollah. Like Hamas, all of these threaten several major Sunni Arab states.

Due to their recognition of the threat Hamas and its allies pose to the survivability of their regimes, Egypt, Saudi Arabia and the United Arab Emirates have taken the unprecedented step of supporting Israel’s efforts to defeat Hamas.

They understand that a decisive Israeli blow against Hamas in Gaza will directly benefit them. Not only will Hamas be weakened, but its state sponsors and terrorist comrades will be weakened as well.

Presently, Hamas’s most outspoken state sponsors are Qatar and Turkey.

As Israel’s Calcalist newspaper reported earlier this week, Qatar is Hamas’s biggest and most important financier, a role it plays as well for ISIS, al Nusra, the Muslim Brotherhood and various jihadist groups in Libya.

Turkey for its part is aligned with the Muslim Brotherhood.

Like Qatar, Turkey has also been a major supporter of ISIS and al Nusra, as well as Hamas. Turkish Prime Minister Recep Tayyip Erdogan’s slander against Israel has grown so hysterical in recent weeks that Prime Minister Binyamin Netanyahu, who has been trying to downplay Turkey’s animosity, called him out on his open anti-Semitism.

By Tuesday morning, IDF forces in Gaza had destroyed 23 tunnels. The number of additional tunnels is still unknown.

While Israel had killed 183 terrorists, it appeared that most of the terrorists killed were in the low to middle ranks of Hamas’s leadership hierarchy.

Hamas’s senior commanders, as well as its political leadership have hunkered down in hidden tunnel complexes.

In other words, Israel is making good progress.

But it hasn’t completed its missions. It needs several more days of hard fighting.

Recognizing this, Israel’s newfound Muslim allies have not been pushing for a cease-fire.

In contrast, the Obama administration is insisting on concluding a cease-fire immediately.

Every weekday JewishWorldReview.com publishes what many in the media and Washington consider “must-reading”. HUNDREDS of columnists and cartoonists regularly appear.

As Israel has uncovered the scope of Hamas’s infrastructure of murder and terror, the US has acted with the UN, Turkey and Qatar to pressure Israel (and Egypt) to agree to a cease-fire and so end IDF operations against Hamas before the mission is completed.

To advance this goal, US Secretary of State John Kerry arrived in Cairo on Monday night with an aggressive plan to force on Israel a cease-fire Hamas and its state sponsors will accept.

As former ambassador to the US Michael Oren told the media, it is clear that neither Israel nor Egypt invited Kerry to come over. Their avoidance of Kerry signals clearly that the US’s two most important allies in the Middle East do not trust US President Barack Obama’s intentions.

And their distrust is entirely reasonable.

The State Department has openly applauded Turkey and Qatar for their involvement in attempts to achieve a cease-fire. Last week Israeli officials alleged that the US was responsible for Hamas’s rejection of the Egyptian cease-fire proposal. By attempting to coerce Egypt to accept Qatar and Turkey as its partners in mediation, Obama signaled to Hamas’s leaders that they should hold out for a better deal.

Due to Turkey’s membership in NATO and the glamour of the Qatari royal family, many Westerners find it hard to believe that they are major sponsors of terrorism. But it is true. Turkey and Qatar are playing a double game.

While sending his ambassador to Brussels for NATO meetings, Erdogan has been transforming Turkey from an open, pro-Western society allied with Israel into a closed, anti-Semitic and anti-American society that sponsors Hamas, ISIL, al Nusra and other terrorists groups.

As for Qatar, the tiny natural gas superpower presents itself to Americans as their greatest ally in the Muslim world. The emirate gives hundreds of millions of dollars to US universities to open campuses in Doha and pretends it is a progressive, open society, replete with debating societies.

Qatar hosts three major US military bases on its territory. And it is becoming one of the most important clients for US military contractors. Earlier this year Qatar signed an $11.4 billion dollar arms agreement with the US.

At the same time, according to the Calacalist report, Qatar is the major bankroller of ISIS and al Nusra in Syria and Iraq. It gives $50 million a month to jihadists in Libya. It gives Hamas $100m. in annual aid. And in the past two years Doha has provided Hamas with an additional $620m. dollars, including $250m. it transferred to Hamas leader Khaled Mashaal’s personal bank account, and $350m. in military aid to Hamas, transferred after the Egyptian military forced the Muslim Brotherhood government from power last July.

Add to that the $100m. per year that Qatar pours into Al Jazeera’s satellite network — which has dedicated itself to undermining pro-Western Arab regimes while popularizing the likes of al-Qaida and Hamas, and Qatar is the largest financier of international jihad in the world.

Rather than notice that Qatar and Turkey are playing a double game, and treat them with suspicion, the Obama administration has embraced them.

Chances that Kerry will secure a cease-fire in the near future are small. In all likelihood, the government will be able to buy the time necessary to complete the mission in whole or large part. But the fact that the US has chosen at this juncture in the operation — with Israel enjoying unprecedented support from the most important Sunni states in the region — to side with Hamas and its state sponsors in their demand for an immediate cease-fire speaks volumes about the transformation of US foreign policy under Obama’s leadership.

America’s self-centered, Me-First mindset will surely bring judgment, and rightfully so.  We’ve abrogated our founding forefather’s intent in establishing a nation based on Godly principles.  Now, our population is focused on gladiator sports, possessions, and being desired.  Demanding judgment are the 55,000,000 babies and counting, . . . which have been MURDERED!

America, is burning as Obama is vacationing and “fundraising” . . . as he fiddles.  That America is so gullible and inattentive grieves me; it allows this evil man to act in accordance with his contract with the devil.

America, though alluded to in several places previously, when it comes to “END TIMES PROPHESY, our nation is not to be found.   Why?

For several decades, I’ve told friends that my intellect tells me there are two potentialities: 1) we are unable to respond and help Israel, or 2) we’ve chosen the wrong side.

As for me and mine, we chose to serve God.  I’d rather die defending Israel!  I plan to test my DNA, hoping I can get past a lack of information regarding my heritage / lineage and make ALIYAH!

Watching closely, working to understand all I may, in this "Age of Information", even from my limited view, I can see much of what's going on ..... and I oft see it's going to impact all of us which is why I share it. My focus is to expose evil, and to serve my Lord and savior Jesus in whatever way He shows me. If one waits long enough, better writers will come along and comment; it's just that I have so little patience with the evil that lurks among us and I've wasted so much time and now, there is so little left! WELCOME!
View all posts by josiahe →
This entry was posted in a href="http://www.startranking.com">search engine submission, Israel and tagged America, End Times, Europe, Gaza, Glick, Hamas, Iran, Israel, kidnap, missiles, Prophesy, rockets, Sports, tunnels. Bookmark the permalink.