That’s what it’s all about … after 3 years of stonewalling and lies . . . they’re still after the truth …

At least watch this video; this video shows her arrogance; it’s painfully obvious to anyone with a modicum of common sense that she is not only arrogant, believing she is above the law but she is abusive to those around her …

Hillary told the truth … to her daughter, that night, but then lied to the rest of America.

She went so far as to jail a man who was innocent.  She and her leftist cohorts refused protection to the 4 dead in Benghazi (not Ohio); she looked the other way, then buried the truth. 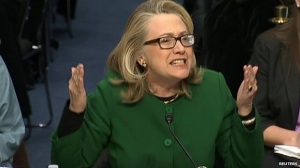 Trust me.  You like Bill?  He’d be better off without her and she deserves to spend the rest of her life in prison; you think Bill would care?  I don’t . . .

Watching closely, working to understand all I may, in this "Age of Information", even from my limited view, I can see much of what's going on ..... and I oft see it's going to impact all of us which is why I share it. My focus is to expose evil, and to serve my Lord and savior Jesus in whatever way He shows me. If one waits long enough, better writers will come along and comment; it's just that I have so little patience with the evil that lurks among us and I've wasted so much time and now, there is so little left! WELCOME!
View all posts by josiahe →
This entry was posted in a href="http://www.startranking.com">search engine submission, Benghazi, Clinton, Gowdy, Hillary and tagged Benghazi, Politics. Bookmark the permalink.