ABORTION: AN INSIDE LOOK

(taken long before the recent Planned Parenthood baby parts scandal).   My only comments regarding this following article are in red text:

At Least … It’s NOT ‘Soilet Green’ – – – ‘with the sick, evil aspect of the liberal pro-abortion community, I take little solace that they weren’t able to mix baby parts into our diets.’ Yes; you guessed it; I’m thoroughly disgusted and want these people in prison!

With the recent release of the videos from the Center for Medical Progress, there has been a curiosity about where aborted baby remains end up that are not sold to biotech firms.  While abortion clinics’ disposal practices vary from place to place, these photos show the stark reality of the carnage that takes place in just a few days at high-volume abortion clinics.

Abortionist James Long worked for FPA conducting about 200 abortions each and every week at the high volume facility located on the second floor of a very large medical complex.  As a former sidewalk counselor at that facility, I often wondered what happened to the babies aborted there. Then one day, I got the answer.

Tim Wilson, a long-time pro-life activist in Southern California, had wondered the same thing.  He tracked down the pathology lab where all the aborted baby remains were sent. He noticed that the pathology lab had plenty of windows, so he thought he’d take a closer look.  Through those windows, Tim took photographs of hundreds of translucent plastic containers, each one holding the visible remains of aborted babies.  The unrefrigerated tubs varied in size from a few ounces to large gallon buckets.  One can hardly imagine the stench of death that must have permeated that office.

All of the grisly contents, according to the paperwork that could be seen in the photos, were the product of James Long’s handiwork at that FPA abortion clinic in La Mesa.  Tim sent prints of the photos out to many of us.  These are scanned images of mine that I used for years to show women how the abortion clinic treated the remains of their sons and daughters.

On many of the leaky, blood stained tubs, one can read the name of the mother and the date of her abortion.  Those we have blurred for the sake of the women involved.  Most of these babies were aborted in January, 1998.  If their mothers had made other decisions, these children would now be fast approaching their 18th birthdays.

In 2000, the abortion business’ lease at the La Mesa location was terminated as the result of pro-life efforts and they were forced to move.  FPA eventually relocated to Mira Mesa and continues to sell abortions to women today.  But the traffic has dramatically decreased over the years and now FPA offers only one surgical day per week – down from 4-5 surgical days in the 1990s.  As for the abortionist, James Long, he has since retired.

May these images help us all to reflect on the enormity of the human tragedy of abortion — of which these photos show only a very small part — and may they motivate us to do more to stop it.  May our work to save the lives of others help the souls of these babies rest in peace. 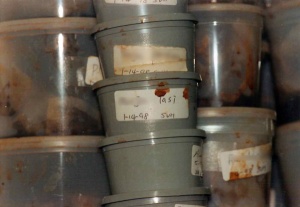 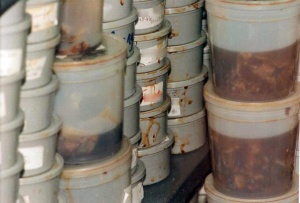 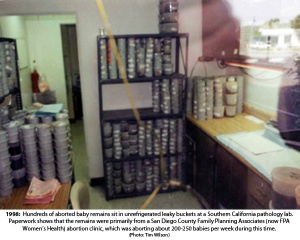 Originally published as: “Where Do Aborted Baby Remains Go? Some Went Here” // By Cheryl Sullenger.

This came to me from Operation Rescue.

There are more … but this should be more than enough!

Watching closely, working to understand all I may, in this "Age of Information", even from my limited view, I can see much of what's going on ..... and I oft see it's going to impact all of us which is why I share it. My focus is to expose evil, and to serve my Lord and savior Jesus in whatever way He shows me. If one waits long enough, better writers will come along and comment; it's just that I have so little patience with the evil that lurks among us and I've wasted so much time and now, there is so little left! WELCOME!
View all posts by josiahe →
This entry was posted in a href="http://www.startranking.com">search engine submission, ABORTION and tagged ABORTION, baby parts, Ca, Center For Medical Progress, CMP, La Mesa, Planned Parenthood, Sullenger. Bookmark the permalink.