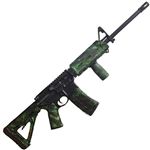 In ignorance (in this case … a lack of basic knowledge of firearm safety) the Los Angeles City Council has endangered family members of law-abiding gun owner’s families and anyone else who is around . . . .

They passed an ordinance last week banning what it calls “large capacity” [read it as “standard capacity”] magazines, ordering citizens to surrender them within 60 days.

One would like to think they had enough sense to ask gun owners, rather than be herded along as the hamsters they evidently are.

Unbeknownst to the unaware, what they now require instead is a 10 round magazine; it’s so unobtrusive, when inserted into a firearm it is easily mistaken for being without a magazine . . . or “unloaded”!

Forgetting a round could also be “chambered” at any time … when a 30 round “clip” or “magazine” is inserted, anyone around knows it could be loaded . . . but with a 10 round magazine being so short, it’s extremely easy to overlook!!!

Subsequently, gun owners caught in possession of a 10+round magazine by LAPD enforcers will face misdemeanor charges, the Los Angeles Daily News reported.

The blood of future victims will be on the legislators!

California already bans the manufacture and sale of such magazines, but “it’s not against the law to possess large-capacity magazines in most of the state.”

And now, true to form, they’ve imposed their edict in L.A., so of course the idiot socialist-types are looking to expand it nationwide.

Here’s just one more reason to move from Los Angeles … maybe that’s what they were after from the get-go?

Watching closely, working to understand all I may, in this "Age of Information", even from my limited view, I can see much of what's going on ..... and I oft see it's going to impact all of us which is why I share it. My focus is to expose evil, and to serve my Lord and savior Jesus in whatever way He shows me. If one waits long enough, better writers will come along and comment; it's just that I have so little patience with the evil that lurks among us and I've wasted so much time and now, there is so little left! WELCOME!
View all posts by josiahe →
This entry was posted in 2nd Amendment, Gun Control and tagged 2nd Amendment, AK, assault rifle, City Council, clip, firearm, gun control, L.A., Los Angeles, magazine, weapon. Bookmark the permalink.