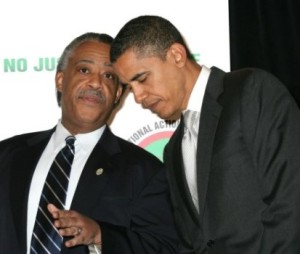 Fanning the flames of racism, facts rarely become obstacles when left-wing bigots set their minds on something . . .

At the initial White House meeting of the “Michael Brown truther and resident racist brigade”, Obama proceeded from the demonstrably false assumption that a tragic injustice was done to the late teenaged thug.

“As I said last week in the wake of the grand jury decision, I think Ferguson laid bare a problem that is not unique to St. Louis or that area, and is not unique to our time, and that is a simmering distrust that exists between too many police departments and too many communities of color.  The sense that in a country where one of our basic principles, perhaps the most important principle, is equality under the law, that too many individuals, particularly young people of color, do not feel as if they are being treated fairly.”

Actually, when has there NOT been a “distrust” between criminal thugs and the police?  That’s a legitimate question, is it not?

I mean , that distrust between young men high on drugs, after just pulling off a strong-arm robbery … when would a loaded young man have not expressed enmity toward an officer of the law?  Any time in the past, but this is in the now!

But it went beyond ‘enmity‘!  It went way beyond that!  I refer you to an old blog … a warning …

Michael, having changed from the polite young man his parents knew, turned into an angry bigoted youth that actually assaulted Officer Wilson!  Why was that?  He did have a new “influential male role-model” in the home — an angry chauvinistic, ex-con, ex-gang-member as a male image to emulate — his step-father — his mother had recently brought that poor role-model into the home …

The president, using this incident again, for his own agenda, fanning the flames of RACISM, announced he was appointing two left-wing establishment puppets to head a useless task force to reach out and listen to law enforcement, and community activists and other stakeholders, but is going to report to me specifically in 90 days with concrete recommendations, including best practices for communities where law enforcement and neighborhoods are working well together — how do they create accountability; how do they create transparency; how do they create trust; and how can we at the federal level work with state and local communities to make sure that some of those best practices get institutionalized.

Even though there is no evidence of wrongdoing on the part of Darren Wilson, police officers are going to receive stricter scrutiny.  Obama also proposed spending $263 million to put body cameras on cops … but it’s more than that!  It’s also for “training”.  Remember his plan to establish a national ‘civilian police force’?  Martial law is his ultimate plan.

The week before, the most explicit of the fire-breathing racist filth-purveyors in the Brown saga has to be professional white-hater and anti-Semite Louis Farrakhan. Before an audience at Baltimore’s Morgan State University he promised a violent uprising … if the demands of demonstrators who want Wilson dead are not met, “we’ll tear this goddamn country apart!”

My comment: If this is not inciting riots, nothing is, … yet Obama and his  lawless, top cop (why is he called “attorney general?) consistently fail to enforce laws of their choosing!

READ THE REST: The above, is excerpts from: http://www.frontpagemag.com/2014/matthew-vadum/ferguson-lynch-mob-leaders-convene-at-the-white-house/?utm_source=FrontPage+Magazine&utm_medium=email&utm_campaign=d544a51f45-Mailchimp_FrontPageMag&utm_term=0_57e32c1dad-d544a51f45-156539009

Watching closely, working to understand all I may, in this "Age of Information", even from my limited view, I can see much of what's going on ..... and I oft see it's going to impact all of us which is why I share it. My focus is to expose evil, and to serve my Lord and savior Jesus in whatever way He shows me. If one waits long enough, better writers will come along and comment; it's just that I have so little patience with the evil that lurks among us and I've wasted so much time and now, there is so little left! WELCOME!
View all posts by josiahe →
This entry was posted in a href="http://www.startranking.com">search engine submission, Politics, Racism, racist, radicals and tagged Baltimore, Brown, burning, farrakahn, Ferguson, high on drugs, looting, marijuana, Michael, Morgan State University, Obama, pot, racism, Racist, riot, Sharpton. Bookmark the permalink.