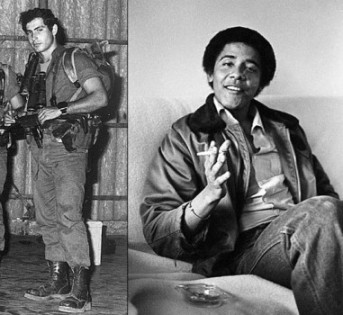 On May 8, 1972, while “Barry” Obama was soaking up the Hawaiian sun, Palestinian terrorists (who else?) hijacked Sabena flight 571 from Vienna to Tel Aviv. A plan was quickly devised to rescue the hostages utilizing Israeli Special Forces of the vaunted Sayeret Matkal.

Benjamin Netanyahu and his brother Yoni, both members, both volunteered for the operation and fiercely argued with each other over which one would participate. The final decision was left to Sayeret Matkal’s commander, Ehud Barak, who chose Bibi.

The commandos boarded the plane dressed as airline technicians and quickly overpowered and neutralized the terrorists while securing the hostages. Bibi was wounded during the assault and when home, carried off the tarmac was greeted by his brother who half-jokingly stated, “You see, I told you, you shouldn’t have gone.”  Yoni was tragically killed four years later while leading the successful “Raid on Entebbe” rescue mission.

Obama of course never served in the military and one could even say harbors disdain for our servicemen and women.  While Benjamin Netanyahu was charging terrorists and freeing hostages, Obama was busy smoking marijuana and attending prep school.

The contrast between these two leaders, one fearless and self-sacrificing, the other perpetually narcissistic and self-absorbed, could not be greater, yet exposed this week is the verbal attack from our cowardly President’s Administration:  A senior member of Obama’s team recently said of Israeli Prime Minister Benjamin Netanyahu: “The thing about Bibi is, he’s a chickenshit.”

And this isn’t all.

“He’s got no guts,” the official continued.

Can you believe this?  This isn’t how the office of the President of the United States talks about the leader of one of our greatest allies, or … it shouldn’t be!

Of course, Obama and his spin doctors are now backpedaling, claiming these are merely the words of a minor official and certainly do not reflect the feelings of President Obama, Secretaries Kerry or Hagel or anyone else high up in the Administration.  This story though, shows who the real chickenshit was, … still is … and who has class and who doesn’t; you decide who the real hero is!

Watching closely, working to understand all I may, in this "Age of Information", even from my limited view, I can see much of what's going on ..... and I oft see it's going to impact all of us which is why I share it. My focus is to expose evil, and to serve my Lord and savior Jesus in whatever way He shows me. If one waits long enough, better writers will come along and comment; it's just that I have so little patience with the evil that lurks among us and I've wasted so much time and now, there is so little left! WELCOME!
View all posts by josiahe →
This entry was posted in a href="http://www.startranking.com">search engine submission, POLITICIANS, Politics, Uncategorized and tagged Atlantic, Barry, Bibi, COWARD, Goldberg, Israel, military, Netanyahu, Obama, Politics, Yoni. Bookmark the permalink.