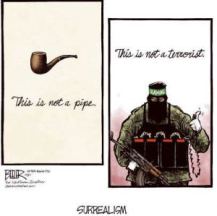 It isn’t hard to understand the truth about Israel and Hamas.

Four-year-old Daniel Tragerman was murdered on Friday afternoon in his home in Kibbutz Nahal Oz by Hamas terrorists.

They shot him with a mortar launched from a school in Gaza’s Zeitoun neighborhood. At the time of the launch, the school was filled with civilians who had fled to the school for shelter.

They fled to the school for shelter because they were forced to vacate their homes.

They were forced to vacate their homes because Hamas terrorists were launching mortars and rockets at Israeli civilian sites, like Daniel Tragerman’s home, from their apartment buildings.

The moral and ideological divide between Israel and Hamas is so self-evident that the only way to ignore it is by embracing and cultivating ignorance.

This week Richard Behar published an in-depth investigative report in Forbes documenting how the US media is doing just that. As Behar demonstrated, the media is collaborating with Hamas in its war against Israel.

Behar cited example after example of how the US media, led by The New York Times have systematically ignored, obfuscated and downplayed Hamas’s war crimes while swallowing whole its bogus statistics and accusations against Israel.

The greatest threat to faux reporters like the New York Times Israel bureau chief Jodi Rudoren and her colleagues are people who refuse to accept their distortions and insist that the truth be told.

The most dangerous of the truth tellers are the non- Jews who stand up for Israel.

This week, former British Labour MP Denis MacShane published an op-ed in Haaretz where he spoke to this point. MacShane argued that for Israel to win the information war being waged against it must cultivate non-Jewish defenders.

In his words, “The British media… is awash with defenders of Hamas and Palestinian resistance. Hardly any are Muslims. In contrast, the prominent journalists — Jonathan Freedland, Daniel Finkelstein, Melanie Phillips, David Aaronovich — who support Israel are, well, Jews.”

MacShane argued that because they are Jews, readers dismiss them.

They “shrug their shoulders and think privately: ‘They would say that, wouldn’t they.”

Israel has an enormous reserve of support among non-Jews. But due to the mainstream media’s commitment to dishonesty and deliberate cultivation of public ignorance and moral blindness in their coverage of Israel, for many, the price of defending Israel is becoming prohibitive.

Israel’s enemies in the West do their best to reinforce this perception.

Consider the case of Jon Voight.

The celebrated Oscar-winning actor is an outspoken champion of Israel. Earlier this month, Voight published an open letter to Penelope Cruz and Javier Bardem in Variety where he harshly criticized the Spanish performers for their public statement condemning Israel and siding with Hamas in its war against the Jewish state.

In his words, “I am heartsick that people like Penelope Cruz and Javier Bardem could incite anti-Semitism all over the world and are oblivious to the damage they have caused.”

Voight was viciously attacked for speaking out.

Last week, two UCLA professors, Mark LeVine and Gil Hochberg, co-authored an article published in The Huffington Post assaulting him for his views and his temerity to suggest that Israel is a moral, embattled democracy fighting genocidal forces committed to its destruction.

The two Jewish academics are supporters of the anti-Israel boycott, divestment and sanctions movement.

The principal aim of the BDS movement is to make it socially unacceptable to support Israel. In 2010 LeVine and Hochberg signed a petition calling for California state universities to divest from companies that do business with Israel.

Online Hollywood commentators, such as Deadline’s Nellie Andreeva, opined that Voight, who was nominated for an Emmy Award for his role in Showtime’s Ray Donovan series, was liable to lose his Emmy bid due to his support for Israel.

Hochberg and LeVine’s assault on Voight was a long-winded voyage into the post-Zionist and anti-Zionist literary moonscape. Their principal criticism of Voight was that he refuses to accept this intellectual wasteland’s rejection of the known facts of history.

Voight is not an academic, nor has he ever claimed to be an expert on Middle Eastern history. He is a non-Jewish American concerned about the future of America.

That is why he stands with Israel. Voight recognizes that when Israel is under assault, and its right to defend itself is denied while terrorists are supported, the US is endangered. And so he feels compelled to speak out, regardless of the price.

In his response to the threats to deny him the Emmy due to his support for Israel Voight told USA Today, “I’m not speaking to get awards. I’m speaking because I’m concerned about my grandchildren and the life they’re going to live, and the country they’re coming in to. I want to protect them.”

Another non-Jewish champion of Israel is former US senator and Republican presidential hopeful Rick Santorum. Both during his tenure in the Senate and since, Santorum has spoken out strongly against Iran’s nuclear program, insisting that it is a serious threat not only to Israel, but to the US itself.

Like Voight, Santorum recognizes that the fate of the US is directly tied to the fate of Israel.

For his trenchant support for Israel, and his outspoken concern about Iran’s nuclear program, as well as his support for domestic issues where he has not shied away from taking controversial, inconvenient position, Santorum’s critics have demonized him.

But undaunted, he continues to speak out.

Last week, Santorum led a solidarity mission to Israel. The majority of his colleagues were non-Jewish opinion shapers from Iowa, the first state to hold Republican presidential contests. Santorum explained that his goal in coming to Israel was not simply to show Israelis that the American people support us. It was to build support among Republicans in Iowa for a robust US engagement in foreign affairs based on supporting Israel, fighting America’s enemies and preventing the forces of hatred, like Hamas and Iran, from expanding their power.

Santorum’s chief concern is that weary of foreign policy failures, more and more Republicans are embracing the isolationism most identified with Senator Rand Paul. Paul is currently polling well in Iowa.

Over the weekend Paul referred to Hillary Clinton as “a war hawk,” and said, “I think the American public is coming more and more to where I am.”

Santorum is convinced that if Iowans are educated about the nature of the threats emanating from the region, and of Israel’s singular contribution to the cause of freedom and stability, their position can become the basis for a Republican foreign policy that rejects isolationism and embraces US leadership in world affairs as the only way to secure the US and strengthen its embattled allies.

In other words, like Voight, Santorum’s support for Israel is rooted in his concern about America, and its future. Like Voight, Santorum recognizes that the growing penchant among elite opinion shapers to ignore truth in the pursuit of moral relativism and fake sophistication or isolationism constitutes a danger to America.

This week the New York Times descended to yet another low, reporting as fact totally unsubstantiated accusations by the son of a senior Hamas terrorist that Israel tortured him and used him as a human shield during a brief incarceration.

But it appears that the jig may be winding down.

More and more people are following the lead of men like Voight and Santorum, and insisting that the truth be told.

Quin Hillyer, a reporter for National Review who accompanied Santorum on his mission, wrote Monday, “My visit to Israel last week confirmed that Iran and its fellow jihadists have good reason to see Israel and the United States in the same light. Israelis and Americans share the same humane, Western values…

“Israel is an oasis in a desert — in the physical, topographical sense but also metaphorically. It’s an oasis of reason, human decency and justice appropriately grounded in mercy.”

MacShane is right. It is vital for more non-Jews, who refuse to deny the truth that screams out to be told, to stand up to the lies and publicly stand with Israel. It is the job of Israel and Jewish communities throughout the world to empower them by among other things, reducing the power of Israel’s enemies to make them pay a price for their decency.

JWR contributor Caroline B. Glick is the senior Middle East Fellow at the Center for Security Policy in Washington, DC and the deputy managing editor of The Jerusalem Post, where her column appears.

Watching closely, working to understand all I may, in this "Age of Information", even from my limited view, I can see much of what's going on ..... and I oft see it's going to impact all of us which is why I share it. My focus is to expose evil, and to serve my Lord and savior Jesus in whatever way He shows me. If one waits long enough, better writers will come along and comment; it's just that I have so little patience with the evil that lurks among us and I've wasted so much time and now, there is so little left! WELCOME!
View all posts by josiahe →
This entry was posted in a href="http://www.startranking.com">search engine submission, Iran, Israel, Jews, Terrorism and tagged Israel, Jews, Terrorism, TREASON. Bookmark the permalink.