The “streets” are normally the domain of leftist activists –the “Occupy – type” crowd; locally, we’re changing that.

When one has zero facts, and therefore no substantive proof to offer against a logical position, those lacking the ability to logically present their side of an argument, one often resort to using an – ad hominem attack – attacking the one presenting the argument, rather than offering facts.

That was the case, last Monday, when an apparent UW student called me an “f***ing moron”.  Jessica (not her real name) was clearly angry, she didn’t like my sign . . . she was angry to the point she could not present a rational argument – there is none.  My  3’ wide by 4’ high, both sides of the poster clearly picture an aborted baby.

She claimed, repetitively, that what was pictured, was “only a chunk of matter”!

Evidently the standard “talking point-term” –  “blob of flesh” had slipped her mind.  Correct me if I’m wrong but I don’t think the pro—abortion movement has changed the terminology as they’re so often apt to do …   Using the term “chunk of matter” is so cold and heartless exhibiting their lack of compassion and caring …   We’ll have to hold that in abeyance and wait and see …

Intuitively, I used a term – Ad hominem – so as to point out to her that she was not facing some mindless fanatical idiot, but it didn’t seem to faze her … she was out-of-control!   Her body language indicated that.   She had the typical  bending down, screaming uncontrollably at the ground; the only things missing were the flailing of the arms and violence …

When this happens on campus, these ideologues fear the obvious proof so much, they try to block the signs from public view – Greg Cunningham, of Abortionno.org calls them “the bed sheet brigade” – stemming, most likely, from his military career.  They staple bed sheets to long wooden poles attempting to “censor” a free exchange of ideas – political correctness cowering at truth!

VIOLENCE – there are stages to watch for, … a time to prepare … a time to punch in 9-1-1- on the cell phone, then wait and be ready to protect oneself, to take the blows and survive.

With men, it’s different; there’s when they take a half-step back and turn the torso, getting ready to “swing” — and any number of other manifestations of pre-violent positions.  One needs to be street-wise and like freeway-driving – always be aware of where others are . . .

It’s imperative one stays calm.  Hopefully, a friend is filming the confrontation – from a safe distance …  When I’m alone, I often ‘station’ myself at an extremely busy intersection and when I can, one  I know is being video-taped, so that, if need be, it  can be subpoenaed into court. 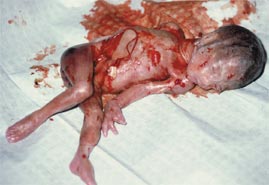 “A Chunk of Matter?”   Or a violent act of Liberalism?

From Wikipedia, the free encyclopedia

An ad hominem (Latin for “to the man” or “to the person”[1]), short for argumentum ad hominem, is a general category of fallacies in which a claim or argument is rejected on the basis of some irrelevant fact about the author of or the person presenting the claim or argument.[2] Fallacious Ad hominem reasoning is normally categorized as an informal fallacy,[3][4][5] more precisely as a genetic fallacy,[6] a subcategory of fallacies of irrelevance.[7] Ad hominem reasoning is not always fallacious, for example, when it relates to the credibility of statements of fact.

Watching closely, working to understand all I may, in this "Age of Information", even from my limited view, I can see much of what's going on ..... and I oft see it's going to impact all of us which is why I share it. My focus is to expose evil, and to serve my Lord and savior Jesus in whatever way He shows me. If one waits long enough, better writers will come along and comment; it's just that I have so little patience with the evil that lurks among us and I've wasted so much time and now, there is so little left! WELCOME!
View all posts by josiahe →
This entry was posted in a href="http://www.startranking.com">search engine submission, ABORTION, Activism and tagged ABORTION, abortionno, activism, ad hominem, bedsheet, Center for Bio-ethical Reform, Cunningham, leftist, political correctness, University of Washington, UW. Bookmark the permalink.