RIGHT or WRONG: THIS IS ISLAM 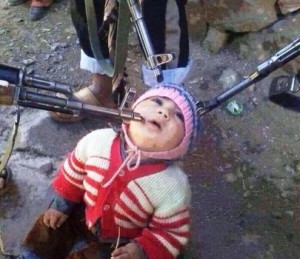 “Our youngest hostage from among the hostile sects of Kessab.”

When it comes to Muslim persecution of Christians, increasingly the past is a blueprint to the present.

According to Sham Times and other Arabic websites, jihadi social media networks posted the above picture of a child sitting on the ground while surrounded by armed men pointing their rifles at him.

The caption appearing with the picture, purportedly posted by a supporter of the Free Syrian Army, is “Our youngest hostage from among the hostile sects of Kessab.”

Kessab is a predominantly Christian Armenian village in Syria near the Turkish border. Earlier it was invaded by jihadis, who terrorized, pillaged churches, and prompted some 2000 residents to flee. Initial reports had stated that about a dozen families remained as hostages.

Since the picture appeared on Arabic social media, many have expressed shock and outrage, condemning the Syrian “rebels,” while others cast doubt on the authenticity of the picture.

Of course, those wondering what the jihadis have to gain from taking such a picture and making it public would do well to remember that these are the same “rebels” who decapitate people and wave their severed and bloodied heads in front of cameras while smiling; these are the same “freedom fighters” who literally eat their victims on camera.

Surely “teasing” an infidel toddler – a subhuman – with their rifles and sharing it with their sadistic comrades via the Internet for a “laugh” should not be too surprising?

Nor is such behavior unprecedented. All one need do is consider the following excerpt based on real events from Fyodor Dostoyevsky’s classic work, The Brothers Karamazov, to appreciate how the present mirrors the past:

These Turks took a pleasure in torturing children, too; cutting the unborn child from the mother’s womb, and tossing babies up in the air and catching them on the points of their bayonets before their mothers’ eyes. Doing it before the mothers’ eyes was what gave zest to the amusement.

Here is another scene that I thought very interesting. Imagine a trembling mother with her baby in her arms, a circle of invading Turks around her. They’ve planned a diversion: they pet the baby, laugh to make it laugh. They succeed, the baby laughs. At that moment a Turk points a pistol four inches from the baby’s face. The baby laughs with glee, holds out its little hands to the pistol, and he pulls the trigger in the baby’s face and blows out its brains. Artistic, wasn’t it?

By the way, Turks are particularly fond of sweet things, they say.

Watching closely, working to understand all I may, in this "Age of Information", even from my limited view, I can see much of what's going on ..... and I oft see it's going to impact all of us which is why I share it. My focus is to expose evil, and to serve my Lord and savior Jesus in whatever way He shows me. If one waits long enough, better writers will come along and comment; it's just that I have so little patience with the evil that lurks among us and I've wasted so much time and now, there is so little left! WELCOME!
View all posts by josiahe →
This entry was posted in a href="http://www.startranking.com">search engine submission, Politics and tagged Christian, Front Page, Islam, jihadis, Muslim, Politics, Terrorists, toddler. Bookmark the permalink.