There is No ‘RIGHT” to not be Offended!

“What I hear most often, (as a complaint) is: “Take that sign down; that’s offensive!”, or “There are children around here; take that sign down!”   More often, I get the one-finger ‘salute‘ … mostly from young people, but not always …

That’s understandable.  It’s a horrible photo for people to have to look at!

Often though, I get a positive response — “Thank you for being here.”

When people are angry, or threaten me, I understand why … I’ve sincerely questioned whether children should have to look at such a thing. Obviously, I feel it’s better to cause children to ask their mommies and daddies what that picture is about … why that baby is hurt . . .

Hopefully, it puts the parents on the spot. They’d rather look the other way and let it continue rather than try to stop it!

It’s going on, just around the corner, down the street, in the village a few miles away . . . . and to do nothing condones it.

I’ve not been assaulted as yet … not seriously.   But it’s there, hovering in some person’s psyche.  So far the assaults have been light — I’ve had people knock the sign from my hands and throw it into the street, or (intentionally/accidentally) bump into me – young women and young men.

I stand on the streets of the Seattle/Tacoma Metro area – in White Center, in front of PLANNED PARENTHOOD’S office (the nation’s largest abortion seller), and over near the UW Medical Center, where they do abortions (they advertise on the net, that they do them).

I’m offended that they kill Pre-Born babies!  Should I not be offended? 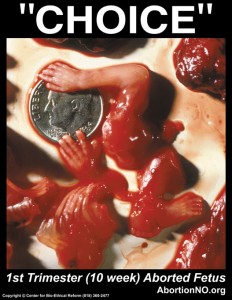 Watching closely, working to understand all I may, in this "Age of Information", even from my limited view, I can see much of what's going on ..... and I oft see it's going to impact all of us which is why I share it. My focus is to expose evil, and to serve my Lord and savior Jesus in whatever way He shows me. If one waits long enough, better writers will come along and comment; it's just that I have so little patience with the evil that lurks among us and I've wasted so much time and now, there is so little left! WELCOME!
View all posts by josiahe →
This entry was posted in a href="http://www.startranking.com">search engine submission, ABORTION and tagged ABORTION, Medical Center, Planned Parenthood, Rights, U. W., White Center. Bookmark the permalink.