I believe Seattle Metro politicians are intentionally endangering motorcyclists, and in light of their economy, I can’t imagine that doing so, has been for any other reason than politics!   One more inept or irresponsible group of politicians? 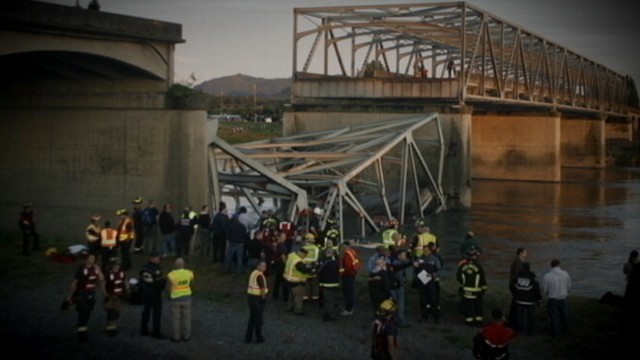 Although it wasn’t the memory of the recent collapse of the 150’ section of an I-5 bridge in Mt. Vernon, Wa. … that section disappeared … dropped 120’ down into the icy cold Skagit river below …

It wasn’t that, which sent chills through me over and over, on my grueling ride home, at 75 – 85 mph ride home … but every time I crossed a Washington State bridge, it wasn’t that … not totally, … but I admit; I gave a big sigh after I was across each new bridge in Washington!

Once into Oregon, I felt much safer knowing our politicians had taken the appropriate actions to protect drivers in our DOT’s repairing of every old bridge; Washington, has NOT done so!

What irritates me more than the state’s inept care of their roadway’s bridges, is that the intense numbers of easily fixable road-hazards when using  the roadways in the city and the surrounding metro areas (suburbs) – in my opinion, … that has to be a political decision!

If my evaluation is correct, and I don’t see how it could not be, then they’re sure to cause (or have already caused) serious injury and/or death, … to motorcyclists even moreso than to 4-wheeled vehicles – totally outrageous!

If it can be proven (by a good attorney – or journalists following this story) that leaving the roadways the way they are, … is solely to promote / to force people onto the newly mass-transit system, they’re due to pay off 10’s of Million$ in damages …… as well they should!

As an avid motorcycle rider, … although the light rail is a marvel of engineering in Seattle’s downtown, the politicians have invested Billions of dollars and are charging the populace a healthy fee to ride round-trip – $5.50 daily while letting the city streets in severe disrepair, full of holes, ruts, and lingering metal plates!

I suspect / believe it’s a politically motivated decision and would encourage a law suit by those injured by the poor conditions of Seattle Metro’s roadways.

Watching closely, working to understand all I may, in this "Age of Information", even from my limited view, I can see much of what's going on ..... and I oft see it's going to impact all of us which is why I share it. My focus is to expose evil, and to serve my Lord and savior Jesus in whatever way He shows me. If one waits long enough, better writers will come along and comment; it's just that I have so little patience with the evil that lurks among us and I've wasted so much time and now, there is so little left! WELCOME!
View all posts by josiahe →
This entry was posted in a href="http://www.startranking.com">search engine submission, POLITICIANS, Politics and tagged bridge collapse, DOT, I-5 Freeway, motorcyclists, Mt. Vernon, POLITICIANS, Politics, Skagit River, Washington State. Bookmark the permalink.