Written at the inspiration of another’s writing …..

Instead of “Iran”, for now, substitute “Islam”

Ignoring our “national situation”, on Feb. 11, 2011, addressing the success of Egypt’s revolution, which he himself enthusiastically supported, …. President Barack Obama triumphantly declared:

“The people of Egypt have spoken, their voices have been heard, and Egypt will never be the same.”

But has the fruit of this change, suddenly turned bitter?   Obviously, it has; whether it’s the temporary truce, between the Palestinians and the Israelis, or not …… thousands of Egyptians are now on the verge of violent rioting in the streets again, some calling the election of Morsi, “a coup,” and others, the violent Sunni’s, supporting him.

So, Tahrir Square: was it a fleeting vision or a nightmare.?

What Obama had to have known, …. it’s now becoming clear – that the Egyptian people have traded a more secular autocratic dictator, for an Islamist dictator, but one who, like Mubarak, was willing to manipulate things, to get America’s foreign aid.

Morsi is taking control as two factions gather to throw stones at each other and Morsi’s Muslim Brotherhood surreptitiously continues to replenish the supply of rockets in Gaza, behind – – – all but the most insider’s backs!

Israel’s already told of their photos, showing more rockets being loaded on ships bound for Egypt, from Iran, … long range rockets, to be smuggled into Gaza for the next” hostilities.”

And on the other side of Israel …. beyond Lebanon, and Syria, …. another (former secular) now radical Islamist (Taliban-like) regime, ….  considering itself a world power is rising.   It’s Turkey, ….. the Ottoman Empire of old.

One can go to the pre-historical record …. SCRIPTURE, and search for what is to happen, but though we’ve entered the age of information, and some point to Daniel 11, or Isaiah 19, little of it is easily deciphered, …. even by knowledgeable scholars.

Some, like Ahmadinejad, await the 12th Imam; others claim the caliphate is rising elsewhere, to take power and rule the world.

Either / both perspectives are extremely dangerous!

Beginning in May of 1948, we have already witnessed the return of the Jewish people to their homeland in Israel, as scripture foretold.

We’ve also watched Obama manipulate his Islamist regimes into place and we wait ….. as Pravda said, the largely “illiterate,” American people watch, not knowing which way to ‘blow.’

We, here in the U.S. are Israel’s ONLY staunch (? or formerly staunch) ally.   Obama plays his cards close to the chest, but someone here, ….. is dealing from the bottom!

What’s next?   One thing is clear.   No one knows when the thief will come to break in, ……  when the “owner” will return.   As scripture warns us: keep your lamps full of oil.   Remain in jubilant expectation, and fervent prayer as we await the return of Jesus. 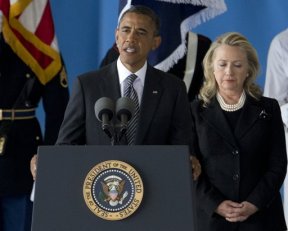 Meanwhile, remember Nakoula, in prison, where Hillary and Obama put him, …. and pray for his Coptic Christians who will, more than likely, be some of the first casualties …. again, … as he tried to warn ….

Watching closely, working to understand all I may, in this "Age of Information", even from my limited view, I can see much of what's going on ..... and I oft see it's going to impact all of us which is why I share it. My focus is to expose evil, and to serve my Lord and savior Jesus in whatever way He shows me. If one waits long enough, better writers will come along and comment; it's just that I have so little patience with the evil that lurks among us and I've wasted so much time and now, there is so little left! WELCOME!
View all posts by josiahe →
This entry was posted in a href="http://www.startranking.com">search engine submission, Politics, Scripture and tagged 12th Iman, Ahmadinejad, Brotherhood, Caliphate, Christians, Coptic, Daniel, Dictator, Egypt, Gaza, Hillary, Iran, Isaih, Islamist, Israel, Lebanon, Matthew, Middle East, Morsi, Muslim, Nakoula, Obama, Ottoman, Palestinian, Palestinians, Persia, Politics, rockets, Scripture, Secular, Syria, Turkey, War. Bookmark the permalink.

1 Response to BIBLICAL PROPHECY: Unfolding right before our eyes