Back to the future? Our children did this in the 50’s …. These are children in Israel who do this now, … every time the sirens go off …..

Picture a scenario for me …..

Liberal’s and those who’ve been apathetic, uninformed, focused on being entertained, or just plain inattentive, for some reason …. their statements are in Blue.

Conservative statements are in Red. 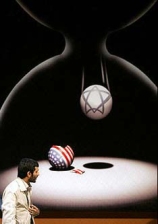 Picture in your mind, … imagine, 16 stories below a mountain in Iran, a number of IAEA (International Atomic Energy Association) scientists and Ph.D.’s have finally been permitted into the country but though they didn’t expect to, … they’ve found what they’ve been afraid of.

They are hovering over what appears to be a nuclear warhead; their passports, tools and gauges are scattered all about.

Behind them, is this huge hourglass with almost no sand left in it.   One scientist has a Geiger counter examining it, and he’s saying, “you’re correct; it appears to be radioactive …. no; no, wait! … it’s definitely nuclear, …   I mean look, look at the dial!   But listen; do you hear it?  It’s . . .   it’s going off the scale, but there’s another sound here!  Someone silence the Geiger counter now!”

Another scientist has a stethoscope in hand, … he nods; . . . everyone watching — “Wait! He’s right; I hear it; it’s not “clicking” like the Geiger counter; it’s … it’s ticking!”   Every one of them takes a step back, startled.

The problem is, that essentially, the hourglass is ticking, you know ….  It doesn’t have to be loaded onto a plane … and flown over another nation to be dropped …

It’s only a matter of time until it goes off somewhere . . . . . possibly, maybe even probably in the middle east, impacting the entire world, but it’s far more likely, … it’ll be in the U.S., or in Europe!

It’s only a matter of time until those who have not been ignoring the Mullahs, the Clerics, and Ahmadinejad … the people of Iran too, … they know the intention for creating such a bomb is only to use it.  I mean, … the excuse of needing to develop nuclear power to produce energy, is so bogus — they’re swimming in oil!   Look at what this is costing; anyone think a rational person would spend this much money when they’re swimming in oil?   We may be paying up the nose for it, but …. For them, it’s plentiful, … like the sand …..

That’s the root of the problem with Islam!

The fanatics, the stupid ones who believe the Mullahs and Clerics, the Qu’ran, … believe they’ll be rewarded if they die trying to kill infidels, successful or not; you’ve heard that ….. the 72 virgins?!   Right?

Yea; I remember that; you mean they’re really that stupid, …. stupid enough to believe that?   Only idiots would believe something that stupid!

Seems so, doesn’t it?   Some do though ….. some only use that belief to get others to commit suicide.  In fact, Golda Meir once stated, …… long, long ago: “Peace will come, when the Arabs start to love their children more than they hate us.”    She was referring to Israel, … to Jews, of course, but they hate us (Americans) even more, ’cause we’re the ones who stand in the way of destroying Israel, … we’re the only ones.   They may very well decide they have to hit the U.S. first because of that!

Sure.  But most likely, in fact, I think it’s probable that they’ll be attacked before the bomb is developed.

No; not exactly; … you still don’t get it.  I think they’ll (the Iranians) will fail, because, … as I’ve said before, I believe it’s because Israel sees no other alternative ….. they HAVE no other alternative than to strike at Iran’s nuclear manufacturing a nuclear weapon first.   Trust me; they WILL hit Iran first …. That’s what Bibi has been trying to tell us all along!   It’s inherent in Israel’s foreign policy, … you know, the one that’s completely stated in  2 simple, succinct words … the reference to the HOLOCAUST ….    “NEVER AGAIN!”

DUH!!!  Israel won’t do that …. but okay; noooowww, finally, … you’re beginning to get it …. but if Israel strikes first, they’ll be seen as the bad guys, … then …. and we’ll (hopefully still) be their ally, probably their ONLY ally!

So …… so you think you’re so smart; whadawedo?

I don’t know; it may very well be too late to do anything already …..

You think we ought to go to war over this?

Well, …. except for the one I mentioned before.

You have an idea?

It’s what you and yours have been complaining about forever ….. what you liberals insisted the U.S. quit doing ….

It’s that . . . . if we supply the Iranian people with guns and we allow them to win their own freedom from their insane leaders!

What do you think?

I’M NOT SURE; I’M THINKING ……   Glad I’m not Obama; I don’t want to have anything to do with making this decision …..

Neither does anyone else …..

Folks, our President is still thinking, and doing nothing, . . . .  Oh, as usual, he’s talking a good game but meanwhile, while Iran moves closer to having a nuke, …. and Israel becomes more convinced it must attack Iran before they do, … and the whole world moves closer to GLOBAL WAR . . . . the white house has gone silent once again . . . .   Once again, he’s hoping it’ll all go away?

Like it or not, there are no effective sanctions in place, and even if there were, … is there time for that sort of thing to work now?   Probably not.

Iran is already supplying the world’s terrorists with weapons to attack Israel, … American Embassies, and even other Arab nation’s leaders …..

What’s out there to make anyone think that if they succeed in getting a THERMO-NUCLEAR WEAPON, … because the world does nothing, ….. that they won’t simply pass it on to terrorists here in America? ? ?

After all, Obama and Congress have seen to it that our southern border is more than permeable; it’s wide open!

A THERMO-NUCLEAR WEAPON burns hotter than our sun ….. 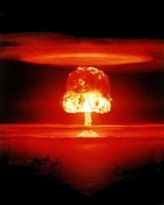 New York, San Francisco, and Washington D.C. wouldn’t survive such a detonation.   Neither would the rest of our nation . . . . .

Oh, maybe some of the “elite” would, …. for a while, … if they knew when it was going to be detonated, … and made it to their bunkers in time ….. in that mountain in Utah, or under the Capital ….. or the airport in Denver …..

Watching closely, working to understand all I may, in this "Age of Information", even from my limited view, I can see much of what's going on ..... and I oft see it's going to impact all of us which is why I share it. My focus is to expose evil, and to serve my Lord and savior Jesus in whatever way He shows me. If one waits long enough, better writers will come along and comment; it's just that I have so little patience with the evil that lurks among us and I've wasted so much time and now, there is so little left! WELCOME!
View all posts by josiahe →
This entry was posted in a href="http://www.startranking.com">search engine submission, Iran, Islam, Israel, Politics and tagged Arab, Bibi, Cleric, D.C., Denver, Duck and Cover, embassy, Europe, holocaust, IAEA, infidels, Iran, Israel, Jews, Middle East, Mullah, New York, nuke, Obama, oil, San Francisco, sanctions, Spring, Terrorists, Thermo, U.S., Utah, virgins, weapon. Bookmark the permalink.

1 Response to DUCK & COVER TIME FOR OUR CHILDREN, AGAIN