SHOULD REPUBLICANS HAVE PICKED CONDI INSTEAD? 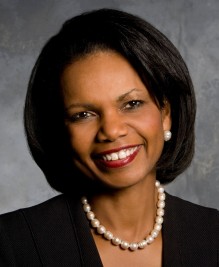 Should they have picked Condi?

Is America too focused on the economy, on money and possessions?   With Mitt, could we save the economy but still lose the nation?

Condi sees the big picture like no one I’ve heard speak!

She could have appointed Mitt and Paul to bring about the change!   If you didn’t hear her speech, you need to get online and seek it out; listen to / watch it twice if you need.

Once again I ask, did they make a mistake; should they have picked Condi?

Watching closely, working to understand all I may, in this "Age of Information", even from my limited view, I can see much of what's going on ..... and I oft see it's going to impact all of us which is why I share it. My focus is to expose evil, and to serve my Lord and savior Jesus in whatever way He shows me. If one waits long enough, better writers will come along and comment; it's just that I have so little patience with the evil that lurks among us and I've wasted so much time and now, there is so little left! WELCOME!
View all posts by josiahe →
This entry was posted in a href="http://www.startranking.com">search engine submission, Obama, Politics and tagged Condi, Condoleezza, Democrat, economy, Obama, plantation mentality, racism, Republican, Rice, RNC, Soros. Bookmark the permalink.