An Israeli court rules the bulldozer death an accident. The media continues to promote a libel.

While this fraud has been well-documented, the media – due either to anti-Israel bias, or to pure sloppiness – continues to promote the blood libel of Israel intentionally murdering Americans.

It was a horrible tragedy. In March 2003, Rachel Corrie, a 23-year-old American, was hanging out in Gaza, trying her hand at “pro-Palestinian activism.” One day, as an Israeli bulldozer was dismantling tunnels used by Gazans to smuggle weapons, Corrie decided to protest. She positioned herself in a trench, in a spot invisible to the Israeli bulldozer driver, and was accidentally crushed to death.

Testifying under oath, the bulldozer driver said he did not realize he had run over Corrie until he heard what had happened over the radio network.

Pro-Palestinian activists seized the opportunity to promote Corrie’s death as a blood libel, accusing Israel of intentional murder. As George Rishmawi, director of the group that sponsored Corrie’s stay in Gaza, told the San Francisco Chronicle (July 14, 2004): Placing American students in danger is good for the Palestinian cause because “if some of these foreign volunteers get shot or even killed, then the international media will sit up and take notice.”

On Tuesday, an Israeli civil court ruled that Rachel Corrie’s death was indeed an accident.

“The death of Rachel Corrie is without a doubt a tragic accident,” the state prosecutor’s office said in a statement. “As the verdict states – the driver of the bulldozer and his commander had a very limited field of vision, such that they had no possibility of seeing Ms. Corrie and thus are exonerated of any blame for negligence.”

Explaining the court’s ruling, judge Oded Gershon said Corrie’s death was “the result of an accident she brought upon herself.” Corrie was in closed military area, with entry forbidden to civilians. The area was the site of daily gunfire by snipers, missile fire and IED explosions. The United States government had issued a travel warning against American citizens visiting the Gaza Strip.

“She did not distance herself from the area, as any thinking person would have done,” the judge ruled.

Yet the media is refusing to let go of the “intentional murder” canard. In reporting the court’s verdict, NBC News published this photo showing Corrie standing in plain view of an Israeli bulldozer, with a megaphone in hand. 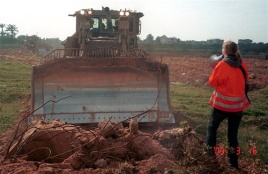 U.S. citizen Rachel Corrie, 23, speaks through a megaphone to an Israeli army bulldozer before she was killed in Rafah, in the southern Gaza Strip on March 16, 2003. (NBC News / Reuters)

Objectively speaking, this photo makes it difficult to believe that the Israeli driver did not see Rachel Corrie. Indeed, the wording of the caption – “before she was killed in Rafah” – emphasizes the idea that at the moment she was crushed, Corrie was clearly visible, standing with a megaphone.  But that is one huge pack of lies.

The truth is that this photo was taken hours before the incident.  At the time of the accident, Rachel Corrie was without a megaphone and was in a hidden position.

This second photo, taken minutes after the accident, shows Corrie bleeding on the ground: ater death.

Any honest journalist can see that the second photo shows a different bulldozer. Note the large rust stain on the right side of the bulldozer’s blade, in contrast to the megaphone photo.

This cannot be passed off as merely an honest mistake. The exact same “mistake” was made nine years ago and the media was called out on it.   CNN’s original 2003 report used the “creative chronology” – and I got them to issue a retraction.   The Christian Science Monitor took the false chronology one step further by distributing the earlier photo of Corrie with the megaphone, claiming that the photo was taken “moments before it ran her over.”

So while this photo fraud has been well-documented, the media – due either to anti-Israel bias, or to pure sloppiness – continues to promote the blood libel of Israel intentionally murdering Americans.

Today an Israeli court of law spoke the truth.  We await the day when truth will likewise prevail in the court of world opinion!

http://www.aish.com/jw/mo/The-Rachel-Corrie-Verdict.html   While leftists chose to believe differently, it’s worthwhile to note that this article is written by Rabbi Shraga Simmons, a man whose faith prohibits him from lying.

Watching closely, working to understand all I may, in this "Age of Information", even from my limited view, I can see much of what's going on ..... and I oft see it's going to impact all of us which is why I share it. My focus is to expose evil, and to serve my Lord and savior Jesus in whatever way He shows me. If one waits long enough, better writers will come along and comment; it's just that I have so little patience with the evil that lurks among us and I've wasted so much time and now, there is so little left! WELCOME!
View all posts by josiahe →
This entry was posted in a href="http://www.startranking.com">search engine submission, Israel, Politics and tagged Corrie, Israel, pro-Palestinian, Rachel. Bookmark the permalink.