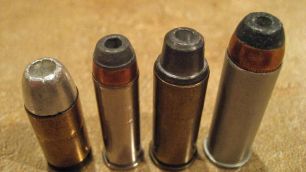 Hollow-point ammo is meant to kill.
Paper targets are not alive!

There is no explanation , other than the government thinks you’re REALLY stupid!

No one wastes money by buying expensive hollow point ammunition just for use at for target practice or even self defense training!

The government is crying “paranoia” about all the conspiracy theories flying around right now, yet they’ve failed to provide a credible reason for the subsequent purchases (a similar purchase of the same ammo was also made a few months ago)!

It’s not just Dept. of Homeland Security, but also other seemingly obscure government agencies (obscure because their purchasing of this ammunition is completely out of context for their normal duties) but they have purchased another 174,000 rounds of deadly hollow-point ammo!

The other agencies (Social Security Administration, is accused of preparing for civil unrest when seniors are denied their social security payments, . . . sound plausible?   If you’ve read my other articles, you know I believe the feds are planning on provoking unrest.

But the National Oceanic and Atmospheric Administration) are claiming the rounds are for leveling the playing field when protecting their agents against fishermen ….. not for their weather casting division …. supposedly, it was just a clerical error ordering it for the weather station employees instead of their field agents trying to arrest fishermen (known to fish only while armed?).

These shells are NOT for defense; rather, they’re for killing people.   Target practice can be accomplished by firing normal shells rather than these very expensive hollow-point shells meant to intentionally tear a body apart and kill the target.

Best case scenario would be to think that this is an incredible stupid waste of money, but the truth is most likely somewhere else . . . .

Like it or not, the public having purchased an immense number of firearms when President Obama was elected has evoked fear in the government!

Think about it!   And, …. while you’re thinking, remember Rham’s reminder to ‘never waste an opportunity to take advantage of a crisis’!

Watching closely, working to understand all I may, in this "Age of Information", even from my limited view, I can see much of what's going on ..... and I oft see it's going to impact all of us which is why I share it. My focus is to expose evil, and to serve my Lord and savior Jesus in whatever way He shows me. If one waits long enough, better writers will come along and comment; it's just that I have so little patience with the evil that lurks among us and I've wasted so much time and now, there is so little left! WELCOME!
View all posts by josiahe →
This entry was posted in a href="http://www.startranking.com">search engine submission, Politics and tagged ammo, ammunition, checks, civil unrest, firearms, hollow-point, National Oceanic, NOAA, Obama, Seniors, Social Security. Bookmark the permalink.