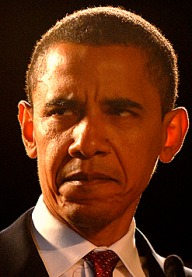 Similar to another incident, Obama inappropriately weighed in too early, just hours after it occurred, on the shooting Friday, saying the Trayvon shooting incident “requires all Americans to do some soul searching.”

Why?   Because Obama thinks we’re all racist, that’s why.   It’s a case of the pot calling the kettle black.

Here, the media reports are already called into question over three important aspects: 1) a witness who says that Trayvon attacked Zimmerman and 2) the fact that police noted in their report that Zimmerman showed signs of being attacked, and 3) all Zimmerman’s friends say there’s not a racist bone in his body!

Yet assuming the worst, there’s a call for “justice” from the black community.   Remember the New Black Panther Party members who were outside the Polling Place in Philadelphia?   Now they’ve offered a $10,000 reward for “the capture and arrest of Zimmerman!”

Have you seen the video of the NBPP leader saying to kill some white cracker babies?

Remember the comment about the police who arrested the black professor and that Obama called the police’s reaction “stupid”, . . . . and the “BEER SUMMIT” that followed?   There was no agreement, no announcements afterwards.   Obama implied there would be, but his comments had been totally out of line!

Watching closely, working to understand all I may, in this "Age of Information", even from my limited view, I can see much of what's going on ..... and I oft see it's going to impact all of us which is why I share it. My focus is to expose evil, and to serve my Lord and savior Jesus in whatever way He shows me. If one waits long enough, better writers will come along and comment; it's just that I have so little patience with the evil that lurks among us and I've wasted so much time and now, there is so little left! WELCOME!
View all posts by josiahe →
This entry was posted in Uncategorized. Bookmark the permalink.