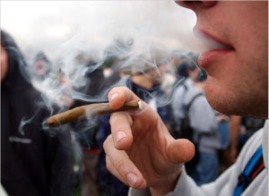 Some say marijuana is a cure or control for Glaucoma.  I’d challenge them to ask those who went blind while depending upon marijuana as a treatment, but to remain skeptical.

Marijuana actually masks the symptoms  allowing Glaucoma to continue stealhed, and for the interocular pressure to spike, often leading to blindness (which was unnecessary if appropriate medications had been used).

Most of those who’ve trusted in marijuana to control their glaucoma, wanted to believe and now that they’re blind, they try to tell their friends and us that using pot …. “well at least it kept them seeing longer”.

It’s the ultimate deception!  Users and those who promote pot as the silver bullet for every ailment under the sun, don’t care who goes blind!  They only want their drug of choice legalized and the like spoiled children they are, they will say anything to get their way!

That’s not to say that there are no healing qualities in marijuana; there are, but as with most illnesses one does not eat the bark of the tree for a headache,   nor do we drink a pregnant horse’s urine for Premarin.  (Most existing drugs came about because of naturally occuring substances, … now synthesized.)

Once again, users do not care about the harm done by those who follow these claims; they only want their drug to get high!  The public needs to understand that those who already use will say anything to get their drugs legalized but that science needs to have time to produce legitimate medicines with consistent dosage and known results.

George Soros, in his book “Soros On Soros“, the evil man behind legalization of pot and OCCUPY WALL STREET, stated that legalizing pot was only the first step – that his goal was to legalize all drugs.  Do the research; read both sides.

Watching closely, working to understand all I may, in this "Age of Information", even from my limited view, I can see much of what's going on ..... and I oft see it's going to impact all of us which is why I share it. My focus is to expose evil, and to serve my Lord and savior Jesus in whatever way He shows me. If one waits long enough, better writers will come along and comment; it's just that I have so little patience with the evil that lurks among us and I've wasted so much time and now, there is so little left! WELCOME!
View all posts by josiahe →
This entry was posted in a href="http://www.startranking.com">search engine submission, Drug legalization, drug use, Drugs and tagged blindness, drugs, Glaucoma, legalization, marijuana, medicinal, Medicine, Occupy, pot, Premarin, smoke, Soros. Bookmark the permalink.