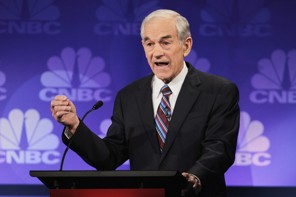 Find out why his supports are so fanatical

See the Red Text below, for just who the group is who is secretly behind Ron Paul, (the man who can’t seem to buy a suit that fits) and why the Media is purposefully hiding who his supporters actually are!

Also, it’s too bad this next news story broke today rather than last night!

Had this story broken yesterday, Ron Paul would’ve looked more a fool than he did already, in last night’s debate in Iowa.

But there’s more that needs to be brought to the light of day.

Every other excuse that could be made for being a “peacenick” showed this Texas radical is in denial, …. he not only rejected even the IAEA report, brought up by Michelle Bachman.   Michelle also called his stance the most dangerous of any candidate!   She’s 100% correct!

The story (mentioned) referred to is the one about the Russian agents stopping a shipment of radioactive material to Iran.   One isotope found, was Sodium-22 (20 times more radioactive than normal) and is oft used to calibrate instruments.   It’s not been released what other product was being sent to Iran, but it’s interesting that a recent sattelite picture revealed an explosion in one of the Iranian nuclear sites, a possible excuse for the need for this shipment.

What is more interesting is how the idiot presidential candidate, Ron Paul, cannot see the threat of an enemy whose normal tactic is promoting martyrdom to it’s “soldiers” willing to die to kill Americans!

If smoking pot, his not being in reality would make total sense, but with his access to information, no other excuse makes sense …. or is he just that naive?

Unlike Yoda, or many potheads, he’s not mixing up his sentence structure, yet Ron Paul is certainly not in reality and the media has not explained why!

It seems that the media, (even including Fox) is either not aware or not willing to say, that the “RON PAUL CONSTITUENCY” is not so much a “pro-auditing the Feds group”, but they are more the PRO-LEGALIZATION GROUP OF POTHEADS”!

They’re not interested in protecting America; they’re more interested in legalizing their drug of choice, but Ron Paul is so naive he can’t see who these people are!   They’ve joined his campaign, but are operating in STEALTH!

These former potheads, now pushing legalization have gathered to this lightening rod as they did to Kucinich last election, but this time, Paul is much more dangerous!   He’s the  virus that has also infected the Occupy movement ….

It’s well-known to the anti-drug lobby, just how the media is pro-legalization – which is why the media has not covered who is supporting Ron Paul’s candidacy!   To get our prohibition-perspective into the news has been a tough uphill battle from the beginning and it’s very clear the press is by-in-large pro-pot!

It seemed clear that ….. Texas Representative, supporters of Ron Paul, must be smoking too much of the pot he wants legal!   If investigative reporters would look closer to see who is behind the Ron Paul candidacy, I’m confident, they’d find the same Pro-legalization Cabal – George Soros, Peter Lewis, and John Sperling.

Watching closely, working to understand all I may, in this "Age of Information", even from my limited view, I can see much of what's going on ..... and I oft see it's going to impact all of us which is why I share it. My focus is to expose evil, and to serve my Lord and savior Jesus in whatever way He shows me. If one waits long enough, better writers will come along and comment; it's just that I have so little patience with the evil that lurks among us and I've wasted so much time and now, there is so little left! WELCOME!
View all posts by josiahe →
This entry was posted in a href="http://www.startranking.com">search engine submission, Politics, Uncategorized and tagged Bachman, Candidate, Iran, isotope, jihadists, Lewis, marijuana, Media, NORML, NORML.org, Occupy, peacenick, pot, pro-drug, pro-legalization, radical, radioactive, Ron Paul, Smuggling, Sodium-22, Soros, Sperling, stealth, Terrorists, Texas, Virus. Bookmark the permalink.