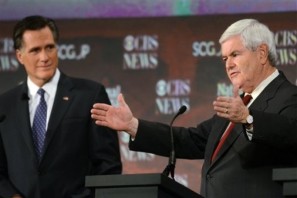 The GOP presidential campaign, looking as if it’s come down to a 2-man race — between Romney and Gingrich, … it looked as if the nation may have a real good look at the two opposing each other, showing their intellect, style, and capability to defeat the Democrat nominee.

That’s not gonna happen!   Real Clear Politics says that Romney has backed out ….

However, Rush and others state that the Obama campaign looks forward to running against Newt, rather than Romney.   To me, that’s all “shuck and jive“!   Rush gives all sorts of reasons but ….

Newt knows and will use Obama’s political history; just like McCain, Romney won’t.

That it was Obama and his Communist/Socialist friends pressuring Barney Frank to force banks to make house loans to those who couldn’t afford them, should be an issue.   It’s what began our downfall!

Obama’s goal is still to bring down the United States; at this juncture, Newt’s our only hope.   This is all contingent upon the fact that the powers behind the curtain allows an election next year.   I still contend they probably won’t.

Watching closely, working to understand all I may, in this "Age of Information", even from my limited view, I can see much of what's going on ..... and I oft see it's going to impact all of us which is why I share it. My focus is to expose evil, and to serve my Lord and savior Jesus in whatever way He shows me. If one waits long enough, better writers will come along and comment; it's just that I have so little patience with the evil that lurks among us and I've wasted so much time and now, there is so little left! WELCOME!
View all posts by josiahe →
This entry was posted in a href="http://www.startranking.com">search engine submission, Politics and tagged Communist, Newt, Obama, presidential campaign, Romney, Rush, Socialist. Bookmark the permalink.