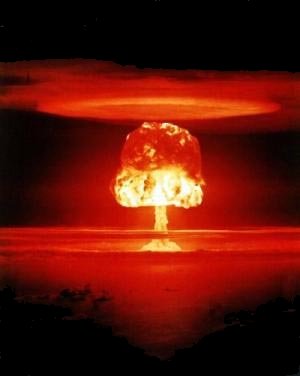 Of course this is what comes later ....

Of course it won’t look like this – not the first one, it’ll shake the land throughout the middle east; but subsequent ones will look similar to the picture.   The first one though, will be an underground blast and it’s much nearer than you think.

An article posted 4/24/2011, on GerDab, the website of the Iranian Revolutionary Guards Corps (IRGC),   envisions the day after Iran’s first nuclear test, this way.

I suspect it won’t happen, that there’ll be an attack on Iran first ….. that is, unless the people of Iran rise up to stop it first!   Otherwise, Israel has no option but to strike first!   It will have to be massive enough to ruin the facilities and therefore will probably kill tens of thousands Iranians if not more!   The U.N. will condemn Israel – that’s a given, as well ……

But, to continue the article published by the Israeli organization – MEMRI, … it states that: “Iran’s first controlled nuclear explosion will not disrupt the daily lives of Iranians, but will only boost their national pride. However, it says, in the Arab world, in the West and in Israel, it will sow a sense of fear mingled with respect for Iran’s achievement. The article makes satirical comments on Iran’s charged relations with the Arabs and with the West.”

The following are excerpts from the article:[1]

“The day after Iran’s first nuclear test will be an ordinary day for us Iranians. But many of us will have a new gleam in our eyes.

“It’s a fine day. The hour is 7:00 AM. The sun is not yet fully up, but everything is already clear. Many countries in the northern hemisphere are starting their day. It’s the first dawn after Iran’s nuclear test. It’s an ordinary day.”

“Yesterday, an underground nuclear explosion took place, probably [somewhere] in the deserts of central Iran, where the Americans and some of the [other] Western countries once wanted to bury their nuclear waste. The blast was not so powerful as to cause much damage to the region, but not so weak as to cause the Iranian nuclear scientists any problem in their experiment.”

“It’s an ordinary day, and just like on any [other] day when there is news from Iran – which is 90% of year – we see reports on the foreign news websites, and they read as follows:

“Al-‘Arabia: ‘A Shi’ite Nuclear Bomb Has Gone Off.’

“The Jerusalem Post: ‘The Mullahs Have Obtained Nuclear Weapons.’

“The Washington Post: ‘Nuclear Explosion in Iran; Shock and Anxiety in Tel Aviv.’

“The local [Iranian press] will also shower this achievement by the Hidden Imam and the Leader [Khamenei] with words of praise, as follows:

“It will be a news storm, but it will not disrupt normal [daily] life in Iran. Employees will come to work and punch the clock on time, or [at most] a little late.  Bakers will not bake unsubsidized bread.  Broadband Internet will function as usual, and even this storm will not make it any cheaper, nor will it cause [Iranian] TV to rethink its policy on the airing of foreign programs.

“The day after Iran’s first nuclear test will be an ordinary day for us Iranians, but many of us will have a new gleam in our eyes – a gleam of national pride and might.

“[Koran 8:60:] ‘And prepare against them what force you can and horses tied at the frontier, to frighten thereby the enemy of Allah and your enemy'”

Watching closely, working to understand all I may, in this "Age of Information", even from my limited view, I can see much of what's going on ..... and I oft see it's going to impact all of us which is why I share it. My focus is to expose evil, and to serve my Lord and savior Jesus in whatever way He shows me. If one waits long enough, better writers will come along and comment; it's just that I have so little patience with the evil that lurks among us and I've wasted so much time and now, there is so little left! WELCOME!
View all posts by josiahe →
This entry was posted in a href="http://www.startranking.com">search engine submission, Politics and tagged atom, bomb, explosion, Israel, Israeli, MEMRI, mossad, Nuclear, War. Bookmark the permalink.