THIEVES AND TRAITORS ARE AT THE HELM! 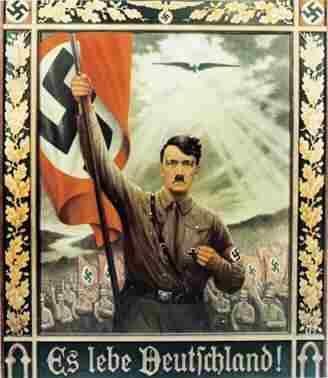 He's said to be holding the spear which killed Christ.

Did Germany’s people trust Hitler?   Though he was a great orator, he came to power after, and to a large extent because of, inflation.

Do you trust Obama and Soros?    You shouldn’t!

I’m a retired locksmith.   Most of my former customers were businesses, and those whose homes were inadequately protected.

Financially, you’re not adequately protected!   You wouldn’t leave your doors unlocked and open if you lived in the inner city, or a high-crime area, would you?   Would you let corrupt banks hold your savings or retirement for you? 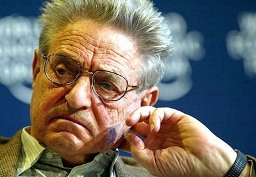 Soros, his employee, President Obama and other One-Worlders, …. those behind the curtain, manipulating world economies, plan on stealing your belongings and your wealth; they’ve already made a good beginning. How?

It’s an old scam, one which governments have used through time, … but people’s memories, and history lessons have grown foggy, plus we’ve had too long a run of affluence to think it could happen to us, but it’s no longer an “IF”.

It’s a “WHEN”!   Only part of it is about greed.   Albeit, a large part,  but another absolutely crucial part of the picture is POWER / CONTROL, but this is not about “why”; it’s about “how”.

Inflation wiped out the savings of:

….. there are plenty of other examples, but these example ought to have gotten your attention!    It should have, but it’s even more important because it’s happening here and now!

Economists tell us to watch Greece, Portugal, Ireland, etc., but what one learns from that, may be too late.

You could take a look back, or ask an old-timer …..   A new 1960 Impala, Convertible, top of the line Chevy then, cost $2995, and a gallon of gasoline had increased significantly, to 31 cents a gallon!   People even then, were taking notice of this new thief but no one thought of him that way — this thief is INFLATION!

In the last 99 years, the U.S. dollar has lost 95% of its value.   Last year, the manipulated figures set the cost-of-living increase at 0%.   That kept those retired from getting an increase in their retirements ….. but prices were still creeping up – things which are not figured into the phony computations, like – food and gasoline.   Now, gasoline prices are impacting every item one purchases and the value of the greenback (no longer backed by gold) has lost 6% of its value in just 6 months!   And, …. this is just the beginning, the indicators, ….. the canary in the mine!

One more example you should be aware of and probably are!   As supplies of an item dwindle, the price increases – the “Supply and Demand” concept.

Over the last few years, as the price of Corn went up, (the result of ethanol being added to gasoline) farmers quit planting as much wheat and planted corn instead.   The cost of wheat shot up but here not enough to substantially impact us but there was less of it.

That didn’t impact you much, not directly, but we export wheat.   In Egypt, where the poor live on about $300 / year, the cost of bread skyrocketed!

Before “STAGNATION” hits (a radical form of inflation) your wallet, … know who is doing it — note the quotes below!    If you don’t know who these people are, look it up ….. It’s important!

“By a continuous process of inflation, government can confiscate (secretly and unobserved) an important part of their citizens’ wealth.” John Maynard Keynes

“Inflation is as violent as a mugger, as frightening as an armed robber, and as lethal as a hit man.” Ronald Reagan

“When runaway inflation struck Germany in the 1920’s the middle class was destroyed which led directly to the rise of the Nazis!” Nick Clooney

Is what we have coming … like the Weimar republic had?   Or more importantly, is it like Nazi Germany, Poland, Hungary, etc., had?

Research the Weimar Republic.   You’ve heard the stories about their money being so worthless they had to take their money in a wheelbarrow when going to the bakery to be able to purchase a loaf of bread, right?   America has been printing money as if it’s just as out of control …..   It is!

Did Germany’s people trust Hitler?   He came to power after inflation.   Do you trust Obama and Soros?   You shouldn’t!   And it’s not just that they have us in an additional war …… nor that they’re shredding the Constitution ……

There’s also, that a new philosophy creeping into our Foreign Policy, …. put there by Soros! It’s the Responsibility to Protect!   It makes the U.S. the cops of the world.

Is that what you want?   Is that what we can afford?   There’s already, Al-Qaeda in Iraq, in Afghanistan, in Libya, …. we’re involved in 3 foreign wars now, and none of those are the most important one – The War on Drugs is in response to what is killing and maiming our children — plus, this “war” is leaving our back doors wide open for terrorists to enter …..

DO NOT TRUST THESE MEN AT THE HELM OF GOVERNMENT!

Watching closely, working to understand all I may, in this "Age of Information", even from my limited view, I can see much of what's going on ..... and I oft see it's going to impact all of us which is why I share it. My focus is to expose evil, and to serve my Lord and savior Jesus in whatever way He shows me. If one waits long enough, better writers will come along and comment; it's just that I have so little patience with the evil that lurks among us and I've wasted so much time and now, there is so little left! WELCOME!
View all posts by josiahe →
This entry was posted in a href="http://www.startranking.com">search engine submission, Politics, War and tagged dollar, Economics, economy, inflation, Keynes, Obama, Politics, Soros, War. Bookmark the permalink.