It’s not as if there were no way to track the guns and crush the Cartels!  That’s not what the ATF was after though!

A GPS chip could have been secreted inside the guns …… 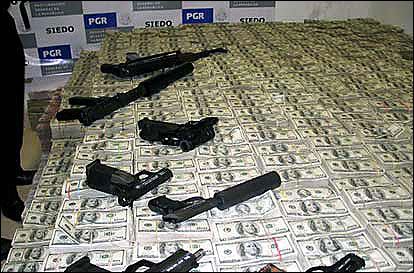 If they had, the Mexican Army could have been part of crushing the violent drug-running Cartels!   It’s their problem but the ATF executives just wanted more funding for their branch of government!

Now, the ATF has caused the death of one of their own ……   As terrorists themselves, they’re only second to the IRS!

Now the question is:  “Is the ATF not complicit in last year’s assassination of Jaime Zapata?   And obviously others?”

Do you think the ATF executives should be personally liable and even prosecuted?

Could the idiots that designed this program, not envision the outcome?   Or didn’t they care?   OK using the word “idiots” is a “when-did-you-quit-beating-your-wife” kind of question, ….. but they ARE either, ….. idiots or jerks!

From Laura Ingraham’s website:  “ATF management was allowing potentially hundreds of semiautomatic firearms to be walked across the Mexican border in order to pad statistics used to further budget and power objectives.”

Laura Ingraham stated that the guns in Mexico were mostly sold to the Mexican Army … that the figures were bogus!   Again, more incompetent and corrupt government officials?   Where does the buck stop?

Insider whistleblowers exposed this – see the link at: http://www.CleanUpATF.org Can you reach this webiste?   Has it been sabotaged?

I love my country, but I fear my government — at this point, we all should!

Watching closely, working to understand all I may, in this "Age of Information", even from my limited view, I can see much of what's going on ..... and I oft see it's going to impact all of us which is why I share it. My focus is to expose evil, and to serve my Lord and savior Jesus in whatever way He shows me. If one waits long enough, better writers will come along and comment; it's just that I have so little patience with the evil that lurks among us and I've wasted so much time and now, there is so little left! WELCOME!
View all posts by josiahe →
This entry was posted in Politics and tagged ATF, automatic weapons, CleanUpATF, Gunrunner, ICE. Bookmark the permalink.