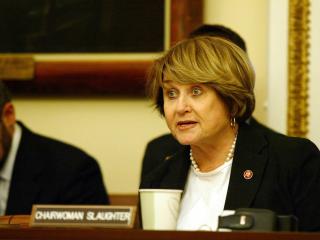 Rep. slaughter is just one; there are too many to name!

The shooting in Tucson is a prime example of the Democrats using the technique they’ve used over and over ……   It’s Rahm’s Standard Operating Procedure to …. “Don’t Waste A Chrisis” – this time, they’re – politicizing a crisis …… AGAIN!

Dozens of Democrats, are calling the rhetoric to be “toned down” ……

It’s as obvious as when they’re using their typical “talking points”.   You know; when they’re all saying exactly the same thing.   Whose lead would you guess they’re following?   Would it be the DNC?   The President’s?   Or George Soros’?

What’s going on now, is that they’re using this crisis to attempt passing the (a misnomer — actually, it’s just the opposite of what they call it) Fairness Doctrine”. It’s the Rodney King plea — “can’t we all just get along?”, only this time they want the opposition to totally shut up!   They want the opposition’s voice completely squelched!  That technique’s  always used during a coup – the take-over of a government.

Chavez did it; all Communists and Fascists do; they shut down the newspapers, only in this case, most all the newspapers are already owned by their side; what they want here is for talk radio, Fox News, Glenn Beck, Rush Limbaugh, Laura Ingraham, etc. all off the air.   Sounds like something a “community organizer” would try; it certainly isn’t fair, as the name implies!

What they don’t get is, what they’re doing that we oppose, and if they’re allowed to accomplish it, their actions will bankrupt America and make us into a 3rd world nation.   It’d also leave Israel vulnerable ……

They’re (even the Pima County Sheriff) politicizing the shooting; they want patriots to shut up and let them ruin (“transform” was his word for it) the greatest nation on earth.

To me, that makes them traitors ……

In the long run, what they seem to want, and I’ve said this all along, is to “tick off” the people enough to where they bring about insurrection.   Then, they can declare Marshal Law, and throw all patriots into internment camps!

Watching closely, working to understand all I may, in this "Age of Information", even from my limited view, I can see much of what's going on ..... and I oft see it's going to impact all of us which is why I share it. My focus is to expose evil, and to serve my Lord and savior Jesus in whatever way He shows me. If one waits long enough, better writers will come along and comment; it's just that I have so little patience with the evil that lurks among us and I've wasted so much time and now, there is so little left! WELCOME!
View all posts by josiahe →
This entry was posted in Politics and tagged "Fairness Doctrine, Chavez, Communists, inflammatory rhetoric, Insurrection, Marshal Law, Obama, Rahm, Rodney King, Socialists. Bookmark the permalink.