There’s a new TV “reality show” about a group unemployed Oregonians who (living with a supposed 10.6 % unemployment rate – actually, it’s higher), have pooled their resources, liquidated what they don’t need, purchased heavy equipment.

They’re headed out to Alaska, to find and mine gold.   As with most “reality shows” there’s something a bit unreal about most of the “reality shows”; it’s the constant conflict going on that gives it away, but conflict seems natural here; these families have taken a big gamble; they’ve gone into predator country, …. they’ve put their whole lives on the line …… this is bear country they’ve moved into.

Food and gasoline, two staples which impact the cost of everything you purchase, are not considered in the CPI (Consumer Price Index).   That’s also a significant part of the (gold) scam.

How can all that be, you ask?   Look at it in a different way: if you figure what an oz. of gold would purchase 100 years ago, and what it will purchase today, nothing’s changed.   Oh, there has been cheaper labor, and goods mass-produced by slaves, machines, or 3rd world wage-slaves and all this make things seem like there’s a big difference, but in reality, a man’s nice tailored suit costs now, the same as it did then.

April, last year, I posted a tip about finding gold and have been amazed at how many hits it has gotten; no one’s compensated me for it, but ….  Truth is, the value of gold is not rising!   It’s that the dollar is plummeting! 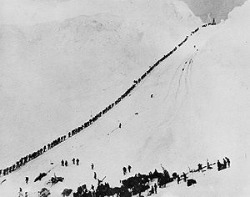 Here’s your own reality check.   Remember the line, ….. during the Klondike gold rush!

Watching closely, working to understand all I may, in this "Age of Information", even from my limited view, I can see much of what's going on ..... and I oft see it's going to impact all of us which is why I share it. My focus is to expose evil, and to serve my Lord and savior Jesus in whatever way He shows me. If one waits long enough, better writers will come along and comment; it's just that I have so little patience with the evil that lurks among us and I've wasted so much time and now, there is so little left! WELCOME!
View all posts by josiahe →
This entry was posted in Economy, Politics and tagged commercials, Gold, reality show, TV, value. Bookmark the permalink.