The Dead End Road we’re on and the darkness ahead.

Communism failed in 1989.   The U.S. had won the victory in the intensely fought cold war with the USSR, or so we thought …..

We became “victorious” via two particular strategies; the first was MAD – the concept of mutually assured destruction.   The second was our manipulation of their war in Afghanistan.  Their loss there, put their economy over the cliff, ….. in the dumpster, so to speak.

Our military prowess had driven them to produce weapons to counter our production of the same …..   Yes; they passed us in number but they came to the same conclusion we had, the fact that it wasn’t pragmatic to hit us first, for we would both be destroyed; it turned out to be a successful tactic.

This tactic, and Charlie Wilson’s (CIA) war, won – not just the battle, but it won the cold war for a time ….. our 2nd tactic – it was the one that’d  tipped the scales …. what we thought, was the final victory over the USSR.  The U.S., and the world, considered them no longer a threat — yet that was wrong, dead WRONG!

Looking back, examining it, one sees that crucial part of American / World history, is what the public usually misses in the big picture ….  but what it did though, … was it successfully loosened mother Russia’s hold on the Muslim satellite nations.

Now, jump forward in time – the USSR has put the (the U.S.) us, in a mirrored position!   Now, it’s our old enemy again, the USSR — is who is driving Iran, the third player in this epic battle, and they’re now fueling and funding the war against the U.S. in Afghanistan.

It’s Ahmadinejad, Iran’s leader, who is the Crazy one – and the Muslims, …. The Iranian people would rather  not be in the picture but …. their leaders want to sacrifice others and are willing to die themselves in order to kill us and the Israeli’s, and Russia is more than willing to use them.

Whether it’s the centuries of inbreeding or not, that’s made them insane, Muslim jihadists are filled with a hatred toward both the U.S. and Israel and they’re now suicidal, fanatical enemies – kamikaze pilots of old.

The USSR is supplying the Mujahideen and Taliban in a proxy war, … just like we did, against them.   We used (funded and armed) the Mujahideen to defeat the Russians in Afghanistan and now Russia has turned it around ……

Obama is attempting to drag the U.S. (patriots, kicking and screaming all the way) into Socialism, … and it’s being done, just now, as Socialism, is failing, not only here, but all across the globe.   Riots are flaring – in Greece, France, with England close on their heels and it’s only begun.

This time it’s MAED, not MAD!   Mutually-Assured-Economic-Destruction, not destruction by weapons but rather, by economics that’s drawn the European masses into the streets.   In back rooms, behind closed doors at the world’s finest resorts, the world’s economies have all been tied together and this time, the Domino theory is real.

The United States’ economic system, capitalism, could have handled these assaults, except for the fact that those who pull the strings of the leaders around the world, (that shadow government, behind the curtain) sent our jobs overseas decades ago, weakening our GNP …..   Remember that well-known quote of Ross Perot?    “That sucking sound?   It’s our jobs going south!”

Obama was the slick-talking con-man to bring “justice”, equality …. etc., our messiah, the one everyone wanted to believe in, but he’s failed.

When they (the puppeteers) realize that a convergence of events has shown his failure for what it is, those who pull the strings will find a way to get rid of him ….   But that’s for another time – it’s not our focus here.

We need to see where we are on the eternal clock; we need to see the overview accurately, …  we’re not just approaching end times; one can see from the watchtower, we’re there!

Afghanistan’s topography provides us a perfect picture:  We’re on a dead end road, which has led us onto a ridge – steep cliffs are on both sides; it’s downhill from here and there’s no slowing or stopping!   A crazy person is at the helm, he’s armed with nukes, and he’s crazy enough to think he’ll be rewarded with 72 virgins if he dies in his attempt to kill us!

Obama is failing to bring a peaceful resolution ….   To keep hope alive, and to reassure those who may still believe in him, he allows it to “slip out” that he’s secretly negotiating with the Taliban, the Mujahideen, and the jihadists.

Meanwhile, Barack has the nation focused on our pocketbooks (greed rearing its’ ugly head again), instead of on the impending WW III, lurking just around the corner. 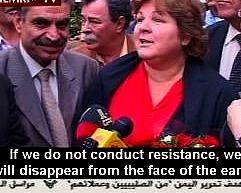 On top of all this, Che’s daughter is all of a sudden in the news.   She’s visited Lebanon recently, to set a wreath at the grave of a well-know terrorist.

That ought to redirect our focus upon our open, unprotected, porous borders again, and the fact that Hizbullah terrorists have been instructing the drug cartels in the building of, and the use of – I.E.D.’s (Improvised Explosive Devices).

Like her father, also a doctor, Dr. Alieda Guevara, recently returned to Cuba from working in Equador.

Is there a Cuban connection we should watch?   Either way, the drug cartels are building IED’s, working with terrorists.   Are they smuggling weapons too, or just human cargo, along with the drugs?

It’s time to check our focus!   It’s NOT God who brought us to this point, we did!

Greed, as scripture reminds us: “the love of money is the root of all evil.”   Lack of it, (jealousy) also helps drive the hate.

I don’t believe there’s time for our nation to recover from the damage done ….. but it’s worth a shot, …. as long as our focus is realistic.   As husbands and fathers, we must do what we can to draw our families – – – all of our loved ones, closer to God.

We were once, a nation blessed by God, for we were the only other nation in history to ever covenant with the living God, ….   But now???   ….. is it that we’re we getting what we deserve?

In the past, Israel was led into slavery when they strayed of the chosen path; many say that’s where America is headed (economic slavery); we’ve certainly strayed!   I cannot express how many times I’ve been concerned about which side the U.S. will be on when the armies of the world march on Israel!   If our leaders sell us out, I for one, would rather die fighting, … in, or alongside, Israel!

The only real answer, is prayer!   Prayer brings strength.   We need the strength to stand strong and stand together.   Whether it’s in the face of evil, a violent jihad, economic slavery, beheading, or nukes, … strength, only comes with submission – submission to God.

Interesting and exciting times in which we live!

Watching closely, working to understand all I may, in this "Age of Information", even from my limited view, I can see much of what's going on ..... and I oft see it's going to impact all of us which is why I share it. My focus is to expose evil, and to serve my Lord and savior Jesus in whatever way He shows me. If one waits long enough, better writers will come along and comment; it's just that I have so little patience with the evil that lurks among us and I've wasted so much time and now, there is so little left! WELCOME!
View all posts by josiahe →
This entry was posted in Politics and tagged Afghanistan, capitalism, CIA, COMMUNISM, Cuba, End Times, Hizbullah, Iran, Islam, Israel, Muslim, Obama, USSR, virgins. Bookmark the permalink.