THE PSYCHOLOGY OF PALESTINIAN HATE 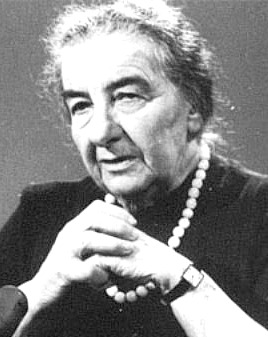 There is a stark difference regarding how Jews (and Christians) love their children when compared to Arab families.

Anti-Jewish hate is so ingrained in the Islamic culture, it must be at the root of the hate so apparent in so many generations ……

Jewish mothers are overly protective and coddle their children, loving them so much it borders on being sinful, but compare that to the hate so ingrained in the Arab culture.

Somewhere back along the time-line, back at the close of WWII, when Jews were given back their homeland and began returning to their land, the war erupted. and has continued to this day ….. it was not long after that, that Golda Meir noted and alluded to the same phenomena and made the following comment:

This clarifies it so well!   Arab parents are known to send their children into the streets to throw rocks at the tanks.   Terrorists take pot-shots at IDF soldiers from behind the children and the parents are fully aware of it!   A Jewish family would no more allow that than they would purposefully kill their own children!

These Palestinian children know that.   Like every child, they desire and need parental love too, but ….. (they’re not dumb!) they know!

Subsequently, they come to resent their parents …… but attempting to work through this issue, the only way they can resolve this cognitive dissonance is to adapt and adopt the hate their parents have toward Jews!   The result, …… this inability to come to rational terms with their situation is what makes the middle east such a powderkeg!

I’d explain it best by the phrase – Cultural Psychosis!

Watching closely, working to understand all I may, in this "Age of Information", even from my limited view, I can see much of what's going on ..... and I oft see it's going to impact all of us which is why I share it. My focus is to expose evil, and to serve my Lord and savior Jesus in whatever way He shows me. If one waits long enough, better writers will come along and comment; it's just that I have so little patience with the evil that lurks among us and I've wasted so much time and now, there is so little left! WELCOME!
View all posts by josiahe →
This entry was posted in a href="http://www.startranking.com">search engine submission, Islam, Islamic Extremists, PALESTINIAN, Psychotic and tagged Christians, cognative dissonance, Cultural Psychosis, hate, insanity, Jews, Palestinian, Psychology, psychosis. Bookmark the permalink.