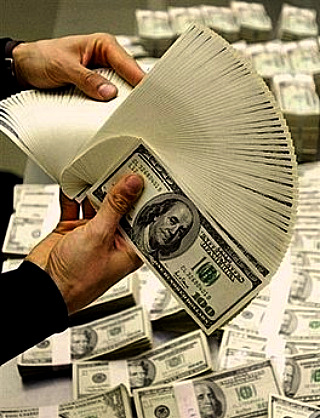 a fistfull of (large)

Why have banks been ripping you off?   ….. Why do they insist on manipulating overdraft charges? …. looking for checks with which they can cause you problems?

They’ve learned how to ‘skirt’ the regulations and laws ….. and there are just too many of them that are lined up to fail ….

Like Congress, bank managers have learned they can write each other huge raises, grabbing what large bonuses they can …. before the FDIC shuts them down.   Credit Card companies and banks ….. what scripture laid down laws about ….. USURY!  Some call it the oldest profession and in a way, they are prostitutes!

The trick is to protect yourself; finding a solvent and ethical bank is not always easy ….. be careful …… your choice should not be based on convenience; rather, at this point, it’s critical!

And rationalizing, just like some consumers, “as long as the economy is going to fail anyway ….”  they might as well grab part of the pie.

They’re businessmen; they know, better than Obama, ….. better than a communist, ….. that one cannot borrow ones’ way out of debt!

They too have families to care for, but when it comes down to that final choice …. when they know they’re in big trouble, you’re their target and make no mistake about it, they care more about their future than yours … or AMERICA’S!

On top of that, ….. many are educated enough to know the history of the Weimar Republic …… and what brought Obama to power ….   Oops; did I say “OBAMA?”

Watching closely, working to understand all I may, in this "Age of Information", even from my limited view, I can see much of what's going on ..... and I oft see it's going to impact all of us which is why I share it. My focus is to expose evil, and to serve my Lord and savior Jesus in whatever way He shows me. If one waits long enough, better writers will come along and comment; it's just that I have so little patience with the evil that lurks among us and I've wasted so much time and now, there is so little left! WELCOME!
View all posts by josiahe →
This entry was posted in a href="http://www.startranking.com">search engine submission, Bank, Communist, Congress, Economy, Obama and tagged Banks, Communist, congress, economy, FDIC, Obama. Bookmark the permalink.