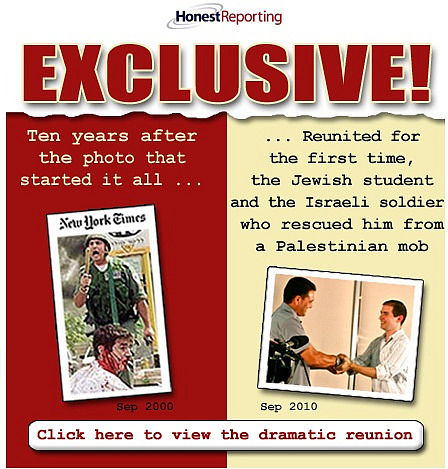 Palestinian / Israeli relations are oft charged with emotion.   The Organization “Honest Reporting” does not leave it to the violent, the liars and others who take every opportunity to exploit it!  Once again, they set the record straight.  There are more heroes here than meet the eye!

On September 30, 2000, The New York Times, Associated Press and other major media outlets published a photo of a young man — bloodied and battered — crouching beneath a club-wielding Israeli policeman. The caption identified him as a Palestinian victim of Israeli brutality — with the clear implication that the Israeli soldier was the one who beat him.

That young man was, in fact, Tuvia Grossman, a Jewish student from Chicago, who was beaten within inches of his life before being rescued by the Israeli border policeman in the photo.

The resulting outrage generated by the gross distortion of the photo “launched” HonestReporting.

Now, ten years later,  [Honest Reporting] caught up with Tuvia in an exclusive interview.  Click here for the reunion ….. as well as the interview.

There are better sources for news, than “The New York Times” ….. much less the Associated Press!    Leftist agent provocateurs, (aka Media) with their Pro-Palestinian agenda, and their lack of honesty causes me to wonder if possibly Prof McPherson had “taught” these  A/P reporters ……

Watching closely, working to understand all I may, in this "Age of Information", even from my limited view, I can see much of what's going on ..... and I oft see it's going to impact all of us which is why I share it. My focus is to expose evil, and to serve my Lord and savior Jesus in whatever way He shows me. If one waits long enough, better writers will come along and comment; it's just that I have so little patience with the evil that lurks among us and I've wasted so much time and now, there is so little left! WELCOME!
View all posts by josiahe →
This entry was posted in a href="http://www.startranking.com">search engine submission, AP, Associated Press, Honest Reporting, Israel, Israeli, Leftist, Lies, McPherson, Media, PALESTINIAN, violence and tagged AP, Associated Press, Honest Reporting, Israeli, McPherson, Media, New York Times, Palestinian, violence. Bookmark the permalink.