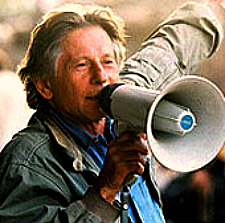 BERN, Switzerland — After months of waiting, the Swiss government declared SLIMEBALL film director Roman Polanski a free man, Monday after rejecting a U.S. request to extradite him on a 1977 charge of raping a 13-year-old girl.

There is little to say other than “BOYCOTT EVERYTHING SWISS!”

No pressure? Read the sign .... she's in front of. Perhaps another HollyWeird wacco?

Samantha, the 13 yr. old victim said she is over what happened and pled for his release.  Somehow, I don’t believe she’s over it – read the sign she’s photographed standing in front of …..

The stunning decision could end the United States’ three-decade pursuit of Polanski, unless he travels to another country that would be willing to apprehend him and weigh sending him to Los Angeles.

France, not particularly known for its’ morality, where Polanski spent much of his time, does not extradite its own citizens.

Though he was an Oscar-winning director of “Rosemary’s Baby,” “Chinatown” and “The Pianist,” he actually produced only one good film – “Knife In The Water”.

Polanski, 43 at the time of the rape, was defended by many HollyWeird celebrities, even though he was accused of plying his 13 year-old victim with champagne and drugs, during a 1977 modeling shoot (the transcript states he was nude?) before raping her at Jack Nicholson’s house.

Polanski was initially indicted on six felony counts, including rape by use of drugs, child molesting and sodomy, but plead guilty to one count of unlawful sexual intercourse.

Watching closely, working to understand all I may, in this "Age of Information", even from my limited view, I can see much of what's going on ..... and I oft see it's going to impact all of us which is why I share it. My focus is to expose evil, and to serve my Lord and savior Jesus in whatever way He shows me. If one waits long enough, better writers will come along and comment; it's just that I have so little patience with the evil that lurks among us and I've wasted so much time and now, there is so little left! WELCOME!
View all posts by josiahe →
This entry was posted in a href="http://www.startranking.com">search engine submission, Nudity and tagged 13 yr. old victim, nude, Polanski. Bookmark the permalink.