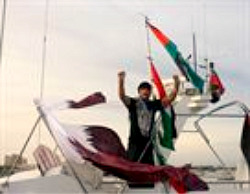 Most people have heard of the fact that Obama’s appointment of Eric Holder as United States Attorney General resulted in the Justice Department’s hiring a number of lawyers already associated with law firms that were currently representing terrorists.

It’s named the Al Fakhoora project – it’s an Internet campaign dedicated to breaking Israel’s blockade of Hamas in Gaza.   They’ll be paid almost $400,000 for the project, which describes Israel’s insistence on controlling naval access to Gaza as “brutal and inhumane” and “crippling.”  It has as, required, registered under America’s Foreign Agent Registration Act.

The PR group also works on behalf of a variety of clients, many of them politically liberal.  Among its more well-known clients is MoveOn.org, an organization run by George Soros, the daddy warbucks for the Obama Campaign as well as financing the majority of the movement for legalizing drugs!

The Fakhoora project ostensibly aims to assist Arab students in Gaza, Judea and Samaria.  However, its top call to action is a “call for a complete and final end to the blockade on Gaza,” and its website is filled primarily with stories accusing Israel of human rights violations for preventing foreign ships from reaching Gaza.

The Al Fakhoora site currently features an interview with Farooq Burney, a Fakhoora worker who was aboard a Turkish ship that attempted to defy the naval blockade of Gaza. Burney accuses Israel of attacking innocent activists, and (as the videos revealed) fails to mention that Turkish activists bearing weapons attacked Israeli soldiers.  A second testimony on the site refers to the Turkish ship incident as a “Zionist massacre.”

Qatar is one of the top donors to Gaza, and sends millions of dollars a month to the area.  Individual Hamas supporters living in Qatar have sent millions of dollars to the terrorist group; among them is Sheikh Yusef al-Qaradawi, who has given Hamas $21 million to buy buildings in Jerusalem.

The few student stories included on the Al Fakhoora project website focus on blaming Israel for allegedly making it difficult to obtain a university education in Gaza.  Israel is blamed for everything from a shortage of pens to cuts in electricity – despite the fact that current electric outages are due to an internal struggle between Fatah and Hamas.

In cases where there are no physical impediments to education, Israel is accused of making it psychologically difficult for students to learn.  “Whenever I think about the siege, I become exhausted, which impacts my studies,” one female student complains.

Al Fakhoora is named after a United Nations school in Gaza which Israel was accused of shelling during the counterterrorism battle Operation Cast Lead in early 2009.

Though it was revealed in early 2009 that Israel had not hit the school, the Fakhoora project continues to refer to the school as “ a United Nations school in Gaza’s Jabaliya refugee camp that was the scene of an attack by Israeli tank shells.”   Drones did capture documented proof that terrorists shot rockets into Israel just before running into the school.  Attempting to hide among civilians, behind human shields, even children is a common tactic for cowardly members of HAMAS!

Watching closely, working to understand all I may, in this "Age of Information", even from my limited view, I can see much of what's going on ..... and I oft see it's going to impact all of us which is why I share it. My focus is to expose evil, and to serve my Lord and savior Jesus in whatever way He shows me. If one waits long enough, better writers will come along and comment; it's just that I have so little patience with the evil that lurks among us and I've wasted so much time and now, there is so little left! WELCOME!
View all posts by josiahe →
This entry was posted in a href="http://www.startranking.com">search engine submission, Drugs, Flotilla, Obama, Politics, Soros, Terrorism, terrorist, Terrorists. Bookmark the permalink.