Shhhhh; they're not suppose to know. 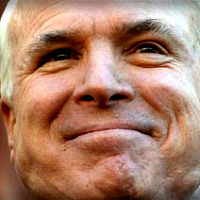 In Chicago, . . . they knew; they recognized it during the election!   It’s how elections have been run in Chicago for decades!   For Chicago, . . . it’s just business-as-usual!

Just like local Chicago elections, McCain was chosen by the powers to be . . . . .   but he was chosen, to lose!   He knew it too; that’s the more-than-disappointing thing about this one-time hero!

The monkey wrench, the fly in the ointment, was (then) Alaskan Governor Sarah Palin . . . . she almost won the election for him, but at the last moment, they sabotaged it . . . . intentionally; those on the inside, set her up to look inept (she’s not) and to be ridiculed.

Didn’t you wonder . . . when McCain refused to bring up Obama’s sitting under a pastor who screamed, “God Bless America?   No; no; no; not God bless America; God Damn America?”

Back years ago, in Chicago, Mayor Daley chose who his opponent was going to be; he always did.   And the Republican bosses, in the city, went along with it.   The city was so heavily Democrat, they didn’t have a chance anyway, they explained.   For going along with his plan, the opposition bosses were given “favors” . . . jobs, to hand out to people.   It’s just the way it worked in Chicago.  (Don’t feel bad; I had to have it explained to me too.)

That’s what happened to our national election!

Why was Obama put there?   He was the one chosen to lead us into the fall of America . . . . a “Kennedy-esque” speaker, who could pull the wool over the eyes of the people and lead them into altruistic goals, making all the wrong moves, overwhelming the system, all the while setting the country up, to fall apart.

I don’t need to go through the steps; you’ve grown tired of hearing each pitfall, each broadcast.   Do you remember Maxine Waters’ slip?   The insiders?  They all knew where this was headed, and they went along with it!   Watch the faces.   It’s TREASONOUS, what they’ve done!

Now the problem for these traitors is, they’ve gotten this far, but they’ve not been successful . . . . and the people seem to be willing to wait until the election to thoroughly clean house . . . . .

They want to declare Martial Law!   What crisis will they use?   They’re not going to allow this next election w/o a guarantee they can win and “Amnesty” didn’t work; the people see through that . . . . .

Watching closely, working to understand all I may, in this "Age of Information", even from my limited view, I can see much of what's going on ..... and I oft see it's going to impact all of us which is why I share it. My focus is to expose evil, and to serve my Lord and savior Jesus in whatever way He shows me. If one waits long enough, better writers will come along and comment; it's just that I have so little patience with the evil that lurks among us and I've wasted so much time and now, there is so little left! WELCOME!
View all posts by josiahe →
This entry was posted in a href="http://www.startranking.com">search engine submission, Chicago, conspiracy, Daley, Obama and tagged Chicago, conspiracy, election, Mayor Daley, Obama. Bookmark the permalink.