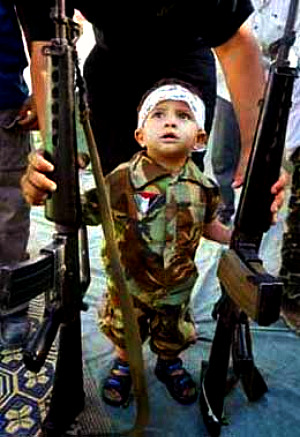 Introducing them to their destiny.

Taught to hate, in state-run schools, Palestinian children wear war attire, and are led toward martyrdom by those who threaten to exterminate Jews yet are cowardly enough to not face IDF soldiers themselves.

Notice that only one of these children looks proud.

Jerusalem Post reporter, Caroline Glick exposes:  “This week Haaretz (the land of Israel) reported on a new hit children’s song that is making waves throughout the Arab world. Called, “When we die as martyrs.”

The song, is sung by a children’s choir called “Birds of Paradise.”

In this YouTube video of the song, children between the ages of two and six sing sweetly of their desire to die for Palestine and are shown triumphantly killing kippa-wearing Jews.

For years, citizens of free nations have willfully ignored or dismissed the significance their enemies’ (terrorists) gruesome goals and ideology.  This can no longer be ignored!  Where is the outrage from the world?  See another video . . . . documenting the difference . . . .

Golda said it correctly: “War will end when you love your children more than you hate ours.”   The trouble is, THEY DO NOT LOVE THEIR CHILDREN!  They wouldn’t do this if they did!

Terrorists who do this to children, deserve to die!

You cowards who do this, . . . . since you won’t stand up to the IDF, try standing up to this old man!  I’m not surprised you won’t; cowards that you are, you’d rather your children die!

Watching closely, working to understand all I may, in this "Age of Information", even from my limited view, I can see much of what's going on ..... and I oft see it's going to impact all of us which is why I share it. My focus is to expose evil, and to serve my Lord and savior Jesus in whatever way He shows me. If one waits long enough, better writers will come along and comment; it's just that I have so little patience with the evil that lurks among us and I've wasted so much time and now, there is so little left! WELCOME!
View all posts by josiahe →
This entry was posted in a href="http://www.startranking.com">search engine submission, Children, Islam, Israel, Jerusalem Post, Jews, Music, PALESTINIAN, Terrorism, Terrorists and tagged children, Hamas, Israel, Jerusalem Post, Jews, music, Palestian children, Palestinian, Politics, Terrorists. Bookmark the permalink.