One can never claim that “ROLLING STONE” has the best interests of the United States at heart.   Neither can one claim that they side with the effort to defeat the Taliban …..

It may seem somewhat silly to some, but I have to look back at my only frame of reference – the movie “Almost Famous.”   From the truths within that movie, the “ROLLING STONE” is about headlines and cutting people down!

If Obama takes him out of the front (it’s not announced as yet) it will be obvious that, once again, it’s his ego that dictates what happens in the White House. 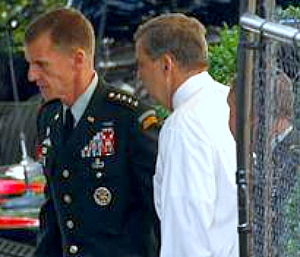 Called home and obedient .... he'll have control of his subordinate's mouths next time.

I say REPLACE HIM!   OBAMA, I mean …..  Replace Obama with McChrystal!

A knowledgable man with integrity, a patriot who puts his life on the line for his country, who speaks his mind, no matter the consequences, is worth his weight in GOLD!

Watching closely, working to understand all I may, in this "Age of Information", even from my limited view, I can see much of what's going on ..... and I oft see it's going to impact all of us which is why I share it. My focus is to expose evil, and to serve my Lord and savior Jesus in whatever way He shows me. If one waits long enough, better writers will come along and comment; it's just that I have so little patience with the evil that lurks among us and I've wasted so much time and now, there is so little left! WELCOME!
View all posts by josiahe →
This entry was posted in a href="http://www.startranking.com">search engine submission, McCrystal, Obama, Rolling Stone and tagged McChrystal, Obama, President, Rolling Stone. Bookmark the permalink.