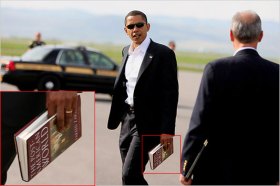 Ask yourself "what is the purpose of reading a book like this."

Yesterday, Obama proved his inability to understand the American Constitution when he challenged them to not overturn an unconstitutional law passed by Congress –  ObamaCare.

Obviously, he believes in judicial activism.   His misunderstanding the most famous law case in America’s history, Marbury vs Madison, his telling his uneducated and hypocritically pious followers that they should circumvent Congress, proves that he does not believe in American’s established system of laws.

Like it or not, Mr. Obama, in the Constitution, there are separation of powers – to have them all is a dictatorship.   I’ve seen dictators – you’re not a dictator!

Again, like it or not, America has a Tri-Cameral system.  You’re in the Executive, but hopefully not for long.   The people of America are seeing to the replacement of the legislature.   The Judicial?   You don’t get it!   Kagan should have recused herself on ObamaCare and you’re silent on that issue . . . one more proof of your contempt for America!

Watching closely, working to understand all I may, in this "Age of Information", even from my limited view, I can see much of what's going on ..... and I oft see it's going to impact all of us which is why I share it. My focus is to expose evil, and to serve my Lord and savior Jesus in whatever way He shows me. If one waits long enough, better writers will come along and comment; it's just that I have so little patience with the evil that lurks among us and I've wasted so much time and now, there is so little left! WELCOME!
View all posts by josiahe →
This entry was posted in (p)RESIDENT, a href="http://www.startranking.com">search engine submission, Obama and tagged Dictator, Executive branch, healthcare, Kagan, legislature, Madison, Marbury, Obama, Obamacare, recuse, Supreme Court, tri-cameral, vs. Bookmark the permalink.